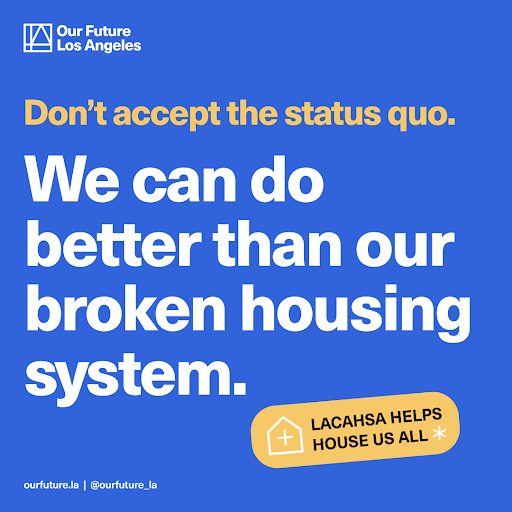 In the not too distant future, you could see a tax measure on your ballot requesting new funds for affordable housing and tenant protection programs in Los Angeles County. This proposal would be sponsored by the newly-minted Los Angeles County Affordable Housing Solutions Agency (LACAHSA, pronounced “la casa”); it would argue that voters should entrust the agency with the funds to carry out its mission, and that we should expand on existing local funding measures like Measure H and Measure HHH, which while helpful, are not sufficient responses to the need for affordable housing.

Yet another government agency? Haven’t we created enough departments and authorities?

But LACAHSA is different and here are the reasons why. It would make it much easier to put affordable housing funding measures on the ballot. With LACAHSA, there will be no need to gather signatures to qualify a measure for the ballot in LA County. The agency’s board will be able to vote to directly put it on the ballot. It would also specifically set aside money for tenant protection programs and provide technical assistance to cities – when cities want to enact affordable housing and tenant-related ordinances, experts at LACAHSA will help to craft sound policies. It would create a place that represents the whole county for the county to truly strategize about affordable housing.

And we’re getting a bit ahead of ourselves. LACAHSA hasn’t been created yet. That would require state legislation to lay out its guiding principles and powers. Abundant Housing LA is excited about this concept, and that’s why we’re supporting SB 679 (Kamlager, 2021) to get LACAHSA set up. We’re not alone. A project like this tends to be most viable with a coalition supporting it, and that’s where the Our Future LA Coalition comes in. SB 679 has to clear its legislative policy committees by the end of June, so this is a good time to get into what the bill would do, and how you can show your support.

The bill starts out with a statement of intent. What’s the problem we’re trying to solve? Simply put, we’re not building enough affordable housing in Los Angeles County. This is also true of housing in general, but this bill’s focus is affordable housing. While each local government has an important role to play in solving that problem, the problem is bigger than any single city, even a city as large as Los Angeles, so a regional approach is needed. At the same time, tenants are hurting, and there’s a need for programs besides creating affordable housing that specifically address their needs.

Watch your housing acronyms now, because unlike LAHSA, LACAHSA would not be focused on homelessness. It would have a 21-member governing board, which would be similar to the LA County Metropolitan Transportation Authority (Metro) board in its composition. It would specifically designate seats for LA City, LA County, smaller cities within the county, and subject-matter experts. There would also be a Citizens’ Oversight Committee composed of 11 different subject matter experts, on topics ranging from affordable housing finance to tenant protections to the lived experience of homelessness or housing insecurity. The Citizens’ Oversight Committee would have to approve the agency’s annual budget before final approval by the board.

What would LACAHSA be empowered to do exactly? Place special taxes to fund its programs on the ballot for voter approval, receive grants, issue bonds, land bank, provide technical assistance, and similar activities. Article XIII C of the California Constitution defines special taxes as taxes imposed for specific purposes and requires a ⅔ vote of the electorate for a local government to impose or increase a special tax. The tax proposals LACAHSA could put forward are parcel taxes (which are not ad valorem property taxes that vary based on property value), gross receipts business taxes, and documentary transfer taxes. All of these would be special taxes, since the funds would be used for LACAHSA’s specific housing-related purposes, and would thus be subject to voter approval. LACAHSA would get some exemptions from the California Environmental Quality Act (CEQA), but basically just for things like providing financing and purchasing land. The actual projects built using its funds could still be subject to CEQA. Local governments would also retain their land use regulatory authority, and LACAHSA as currently proposed would not be able to act as the permitting authority for a project in an intransigent city. These issues have been points of contention, and although we have expressed our views that CEQA makes it more difficult and expensive to build infill housing, and that preempting local zoning authority would be helpful, the author did not adopt corresponding language into the bill because it was determined that this would significantly decrease the odds that it would survive the Sacramento gauntlet.

Labor standards are almost always a key issue in state housing legislation. SB 679 takes the approach of requiring prevailing wages to be paid for all projects and a project labor agreement (PLA) for developments of 40 or more homes. The PLA would be a collective bargaining agreement modeled on one used by the City of Los Angeles Department of Public Works. Prevailing wages are already required on public works projects, which are construction projects paid for with public funds, with some exceptions, so it’s not surprising to see that requirement here. A project labor agreement would contrast somewhat with skilled and trained workforce requirements, which are sometimes applied to housing bills. These require certain percentages of construction workers to be graduates of state-approved apprenticeship programs that are mostly run by unions.

If voters give their approval to a LACAHSA tax measure, that funding would have to be dedicated according to specific rules:

The general categories and percentages of spending are one thing, but where exactly the money will be spent is another. The bill addresses this issue too. Simplifying a bit, 70% of the funds for locally-administered LACAHSA programs would go to jurisdictions based on their share of lower-income housing needs. The other 30% would be allocated in a more discretionary manner based on considerations such as affirmatively furthering fair housing, displacement risk, the location of rent-burdened populations, and the needs of people with disabilities.

Overall, SB 679 would create a framework for more robust funding of affordable housing and tenant protection policies in LA County. It would make it much easier to qualify funding measures for the ballot. While it would be amazing to strengthen this concept with the ability to preempt overzealous local zoning and build infill affordable housing without having to go through CEQA, these ideas were left aside for now, in the interests of getting something passed. Funding isn’t the whole solution to the housing affordability crisis, but it’s certainly part of the solution, and LACAHSA would make it easier to bring adequate funds to the problem. If this sounds exciting to you, please check out our action alert and let your legislators know you support SB 679! 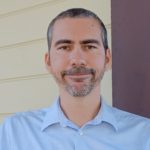