A “Yes, And” Approach to Housing Growth

Buildings that combine residential and commercial uses are not a new idea. Apartments above ground-floor retail can be found throughout America’s older cities and towns, and even existed in the ancient world. But this concept, today known as “mixed-use development”, is having a renaissance in American cities, including Los Angeles.

Encouraging multifamily housing growth along major corridors with lots of retail and offices, areas that are usually zoned for commercial development, has significant advantages in the modern city. It puts people closer to transit, job centers, and “daily needs generators” like grocery stores and coffee shops, making it easier to drive less. Building housing in commercial zones rarely involves demolition of existing housing, helping to prevent displacement of current residents. And in a post-pandemic world, where flexible work schedules and remote work are more common, there’s a stronger impetus to convert excess office space into housing.

In the City of Los Angeles, housing and mixed-use development are permitted “by-right” in commercial zones, leading to faster project approvals and less political interference. Downtown’s recent boom in new housing construction and adaptive reuse of older commercial buildings mostly took place on commercially-zoned land. This helps to explain why over 30% of the County’s housing growth between 2014 and 2019 happened in commercial zones. 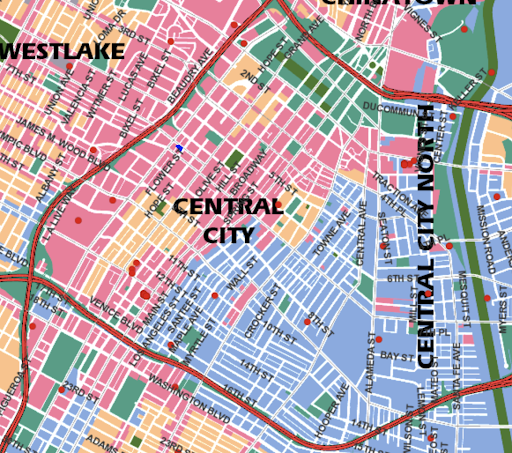 A zoning map of Downtown LA, most of which is zoned commercial (pink) and light industrial (blue)

Terner’s “Strip Malls to Homes: An Analysis of Commercial to Residential Conversions in California” analyzed recent trends in residential development in commercial zones throughout the state’s major metro areas. Using this information, they built an econometric model to project future housing growth in commercial zones. They found that in Los Angeles County, only about 25,000 homes will be built in commercial zones over the next five years. That’s just 3% of the 813,000 new homes that the County needs by 2029 to meet its Regional Housing Needs Assessment target.

This stands to reason: only about 5% of the City of Los Angeles’ land is zoned commercial. When you take 95% of the City’s land off the board, you’re simply not left with many places to expand housing – especially given that most commercial parcels already host profitable businesses with long-term leases, and are thus unlikely to be redeveloped in the near future.

A commercial-only approach to housing growth is also unlikely to encourage socioeconomic and racial integration. Terner found that conversion of commercially-zoned land to residential use is likeliest in low-resource, high-segregation neighborhoods. Most of the land in high-resource areas, like Hancock Park, Sherman Oaks, and Brentwood, is zoned for single-family houses only; these areas have little commercially-zoned land. 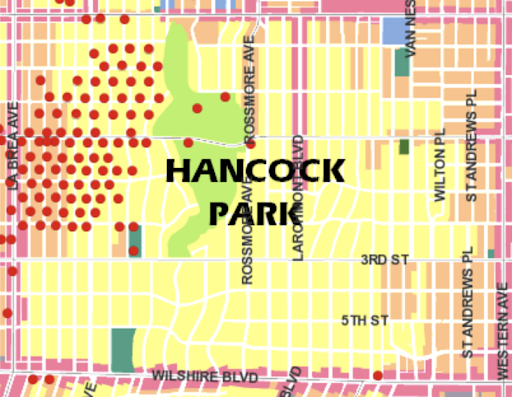 There are other disadvantages to relying on commercial corridors for housing growth. Major streets have more vehicle traffic, leading to more noise and lower air quality nearby. Development along boulevards, rather than in cohesive clusters, is less likely to encourage a walkable, vibrant built environment. Commercially-zoned land is generally more expensive than residentially-zoned land since residential builders and commercial developers compete for these relatively scarce lots.

But what of the argument that development on commercial corridors avoids sparking community opposition? Unfortunately, recent examples demonstrate that NIMBYs will always find a reason to oppose more housing. Last month, the San Francisco Board of Supervisors rejected a 495-unit apartment building, planned for on the site of a Nordstrom parking lot, under pressure from NIMBYs. Closer to home, an abandoned fast-food restaurant on Los Angeles’ Westside has (ludicrously) been nominated for Historic-Cultural Monument status, in an obvious attempt to block a proposed 24-unit housing project. Both projects are located on commercially-zoned lots.

Much like improv comedy, housing reform requires a “yes, and” approach. Yes, Los Angeles needs more housing on commercial corridors…and in residential neighborhoods with apartment buildings…and in single-family zoned areas. Our cities need more mixed-use development on bustling boulevards…and more apartment buildings in residential neighborhoods near jobs and transit…and more ADUs, fourplexes, and bungalow courts in single-family zoned areas. A balanced, “all of the above” strategy, is the path to housing abundance and affordability.