A YIMBY Movement about WHERE housing is built and for WHOM 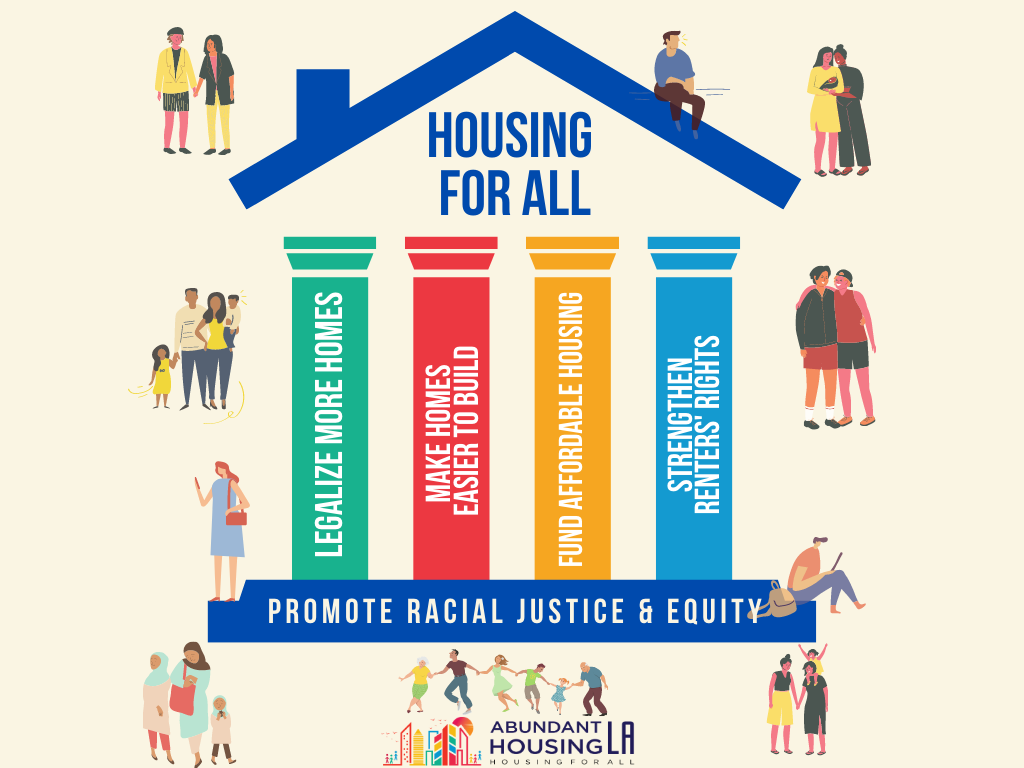 Abundant Housing LA is building the pro-housing movement for LA. But it’s not enough to just be supportive of housing. Achieving housing abundance requires thoughtful approaches that center equity, racial justice, and environmentalism.

Cities are a crucial part of diverse, sustainable communities. But the history of land and zoning is one of racism, exclusion, and segregation. And even that is an understatement. Entire BIPOC communities were deliberately destroyed by “urban renewal” programs such as expansions of freeways, motivated by racist aggression. For example, in the 1950s, a Black community in Santa Monica was deliberately destroyed by the I-10 freeway after white communities rejected a route going through their neighborhoods.

We can’t undo history, but we can do our part to prevent the same mistakes from happening again. That is why Abundant Housing is committed to critically reexamining our approach to housing, our past positions, and direction in the context of equity and racial justice. We seek to continually improve and do better through the insights and feedback of communities most impacted by the housing crisis, racial segregation, and gentrification.

Regional patterns of housing development that direct the majority of new construction to low-income neighborhoods of renters is a fundamental cause of gentrification and displacement. Housing growth is necessary and it must go somewhere to provide housing for our growing populations. But when all of that growth goes to places with existing multifamily apartment buildings (instead of being distributed equitably and sustainably), that creates the pressures that drive existing communities away. This is the status quo approach currently in place in Southern California. 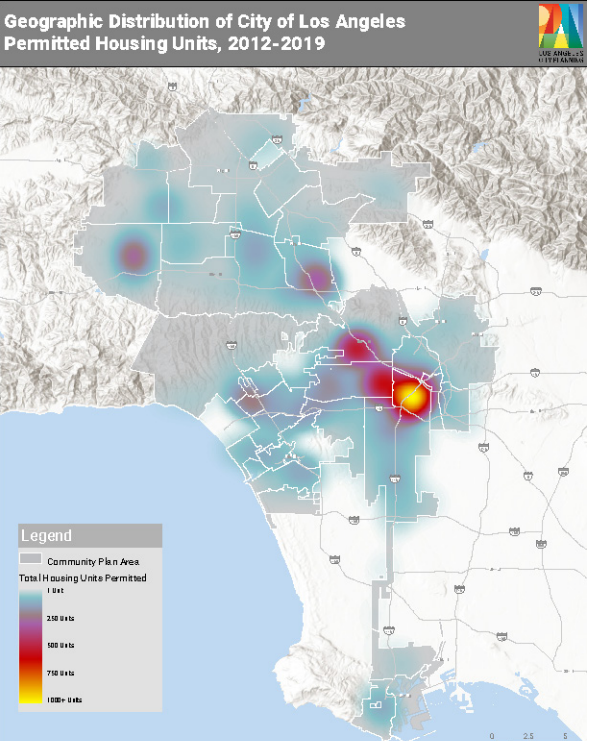 To illustrate this all-too familiar problem, job growth and population growth drive up demand for homes. But because exclusionary barriers exist for new apartments in neighborhoods that have been higher-resourced and advantaged, new construction then is limited to and concentrated in communities without equal political power. Because of historic segregation and redlining, those communities also tend to contain existing apartment buildings. New construction is more desirable, and in a constrained housing market, commands high rents. Thus, higher-income, primarily white people move into the new housing. And unlike single family or commercial zones, land with renters means demolishing older, more affordable apartment buildings to replace them with pricey apartments. Abundance of housing can’t be achieved through new construction replacing existing affordable apartments in just a few targeted neighborhoods.

Imagine a high-income person with a new tech job in a single-family zoned place like Culver City. That person, who is likely to be white, can pay a lot for housing, but scarcity in Culver City means they must look elsewhere, to neighborhoods like Inglewood, which has faced displacement of lower-income people of color. It’s easy for this hypothetical person to outbid local residents for limited amounts of housing. This person can also pay more than many existing residents for goods and services. On a macro level, this causes gentrification, while the exclusionary neighborhoods in Culver City are unchanged. As a society, we need to look to increase production in places where housing is not adequately permitted to take the pressure of gentrification off of other neighborhoods.

This is not just the right approach in terms of equity. By focusing on places with little to no housing construction, it is actually a better approach for achieving housing abundance.

Many of us became involved in this movement because we seek to undo the exclusionary zoning endemic in many high-resourced and advantaged communities. These are neighborhoods with access to jobs, transit, resources, clean air, and cooler climates. Building housing in these places is necessary for getting California on track for climate goals, and for adapting to climate change. Excluding new people and especially lower-income people from these neighborhoods is an equity issue and an environmental issue. That’s why we seek to combat the problem of NIMBYism–the “Not In My BackYard” culture that stigmatizes apartment buildings and density.

But just because we advocate in exclusionary and advantaged neighborhoods, that does not mean we can treat all neighborhoods the same way. We must always take into context the history and experiences of people facing the impact of racist land use and zoning policies. We must ensure that regionally, housing is distributed equitably so that the legacy of redlining does not continue. We must advocate for a balance of political and representational power. And in the environmental context, development cannot destroy natural habitats or force people to live in hazardous fire areas. This is the WHERE of housing.

California needs more housing at all income levels. But because new housing is the most desirable housing, the market alone cannot fully address the housing needs of all Californians, especially in the short-term. Acknowledging this reality, Abundant Housing LA advocates for funding sources to ensure everyone is served by new housing construction. We are constantly exploring new, creative ideas for leveraging funding sources, since the systemic causes of economic inequality, including Prop 13, show no sign of disappearing in this state. Advocating for a future where everyone can afford a home that meets their needs, where they want to live, is the WHOM of housing.

Addressing exclusionary zoning and providing housing to meet our growing population is necessary for us to build a future of equity, sustainability, and livability. If we fail to plan for housing in the right ways, we will be passing housing unaffordability and segregation down to future generations. We can’t afford to continue along the status quo in this crisis, and that is why the WHERE and the WHOM of housing must be taken into account.