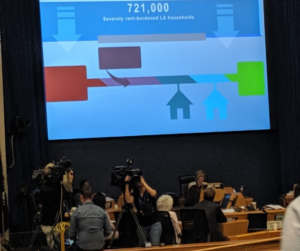 On Tuesday, July 30, 2019, the City Council of Los Angeles unanimously voted to extend LAMC 85.02. This decision continued unnecessary financial penalties on the individuals and families who rely on their private vehicles as their only form of shelter. Under LAMC 85.02, people cannot sleep overnight while parked on residential streets, or live in their vehicles at any time within a block of a park, school, preschool or day care facility.

Our unhoused neighbors residing in their vehicles number more than 9,500. This extremely misguided policy creates  enormous barriers to those who have no other choice on where they live, punishing some of our most vulnerable members of society while they’re at their lowest.

Despite historic funding for supportive housing from both the city and county, homelessness continues to grow rapidly, up 12% in 2019 in Los Angeles County.  According to the Los Angeles Homeless Services Authority (LAHSA), the housing affordability crisis is driving this regional increase in homelessness. 721,000 households in Los Angeles are severely rent-burdened. Even with the most concerted effort to house the homeless that this city has ever seen (over 21,000 previously homeless people placed last year), our shortage-induced housing affordability crisis is forcing more people into homelessness than we are able to house.

The decision to extend LAMC 85.02 is an inappropriate, and inhumane, action to take in the midst of this crisis. We do not have enough affordable housing or supportive housing to accommodate needs. It is unconscionable to punish unhoused people using their cars as shelters, as they have been provided no other viable options.

There is no way out of this severe homelessness crisis other than to house people. Homes end homelessness. See Abundant Housing LA’s Response to the 2019 Homeless Count.