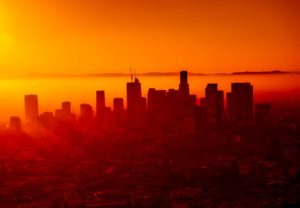 Abundant Housing LA joins the growing coalition of policy experts and housing organizations, and asks that the Southern California Association of Governments (SCAG) Regional Council reject the use of local inputs for the allocation of regional housing need, and instead, instruct SCAG staff to propose an allocation formula based on objective measures that align with the stated priorities of Housing Element Law. In other words, we are asking SCAG to plan for housing needs better by concentrating housing in job-rich, high-cost areas, and reduce sprawl.

Our region has a severe housing crisis. Housing is scarce and unaffordable near jobs, commercial areas, and transit. Massive displacement pushes people out of the region, and forces others to commute long distances by car. One-third of all Los Angeles households are severely rent-burdened, and Los Angeles County’s homeless population increased by 12% in the last year. SCAG must reverse these trends and adopt policies that will allocate housing targets to promote housing density where it is needed.

Local inputs are projections of household growth under current zoning. Using them as a basis for RHNA works directly against environmental and social goals because it pushes more housing to parts of the region with fewer jobs and lower incomes. Cities in Los Angeles County and Orange County closest to abundant job opportunities are mostly “built out” under existing zoning, and therefore have a relatively low projected household growth. These cities could, however, accommodate housing by rezoning land strategically. Using local inputs to allocate RHNA is not consistent with a law requiring the plan “to increase access to areas of high opportunity for lower-income residents”. RHNA should push for more low-income housing in high opportunity cities but using local inputs does the opposite. It pushes housing growth to the cities farthest from job opportunities – which have land to build on, and thus higher projected household growth.

We ask that the CEHD committee and the Regional Council replace Option 1 and 3 with different allocation methods for public consideration, methods that use objective measures consistent with the goals of advancing environmental sustainability and social equity. SCAG’s Option 2 considers population share and access to high-quality transit. This is based on objective measures, but it is not sufficient. I suggest SCAG also consider factors including:

1. Housing costs,
2. The share of multifamily housing stock,
3. The share of subsidized housing,
4. The ratio of jobs to housing in the city, and
5. The share of regional jobs within a short commute.

Using these objective measures would allocate regional housing need in a way that advances environmental sustainability, and affirmatively furthers fair housing at the regional scale. The social equity adjustment is also an important issue. It is used to modify RHNA allocations by income category, to give higher numbers of lower-income need to relatively more affluent jurisdictions. It should be increased from the past practice of 110% to 200%. It is important to note, however, that if high opportunity cities have a low total RHNA number, the social equity adjustment will have a limited impact. The way we decide cities’ total housing need is potentially more consequential for increasing access to areas of high opportunity for lower-income residents.