How Many Affordable Homes Does L.A. County Need?

California’s housing crisis is a product of scarcity. For decades, our state and the Los Angeles region have allowed too few homes to be built, especially in transit- and job-rich areas, causing a toxic brew of escalating rents, displacement, segregation by race and income, and homelessness. The housing shortage is particularly acute among lower-income households; last year, 40% of L.A. County households with very low incomes (earning <50% of the area median income) spent more than half their income on housing.

To fully address the need for housing that is affordable to lower-income families, we should first know how large the need is. Governments and policy analysts have reached different estimates of L.A. County’s affordable housing shortfall. Here, we’re defining “affordable housing” as homes that cost less than 30% of monthly income, for households earning <80% of AMI.

Through the Regional Housing Needs Assessment process (RHNA), the Southern California Association of Governments (SCAG) has instructed the cities of L.A. County to plan for 341,000 homes by 2030 that are affordable to very low income (<50% AMI) and low income (50-80% of AMI) households. The California Housing Partnership recently estimated that L.A. County needs 500,000 more affordable homes, just to meet the needs of very low income households (<50% of AMI).

Abundant Housing LA estimates that L.A. County has a deficit of over 700,000 homes that are affordable to very low income (<50% AMI) and low income (50-80% of AMI) households. This estimate is based on SCAG’s methodology for determining cities’ RHNA targets, with adjustments to reflect full housing needs. Here’s how we arrived at this estimate: 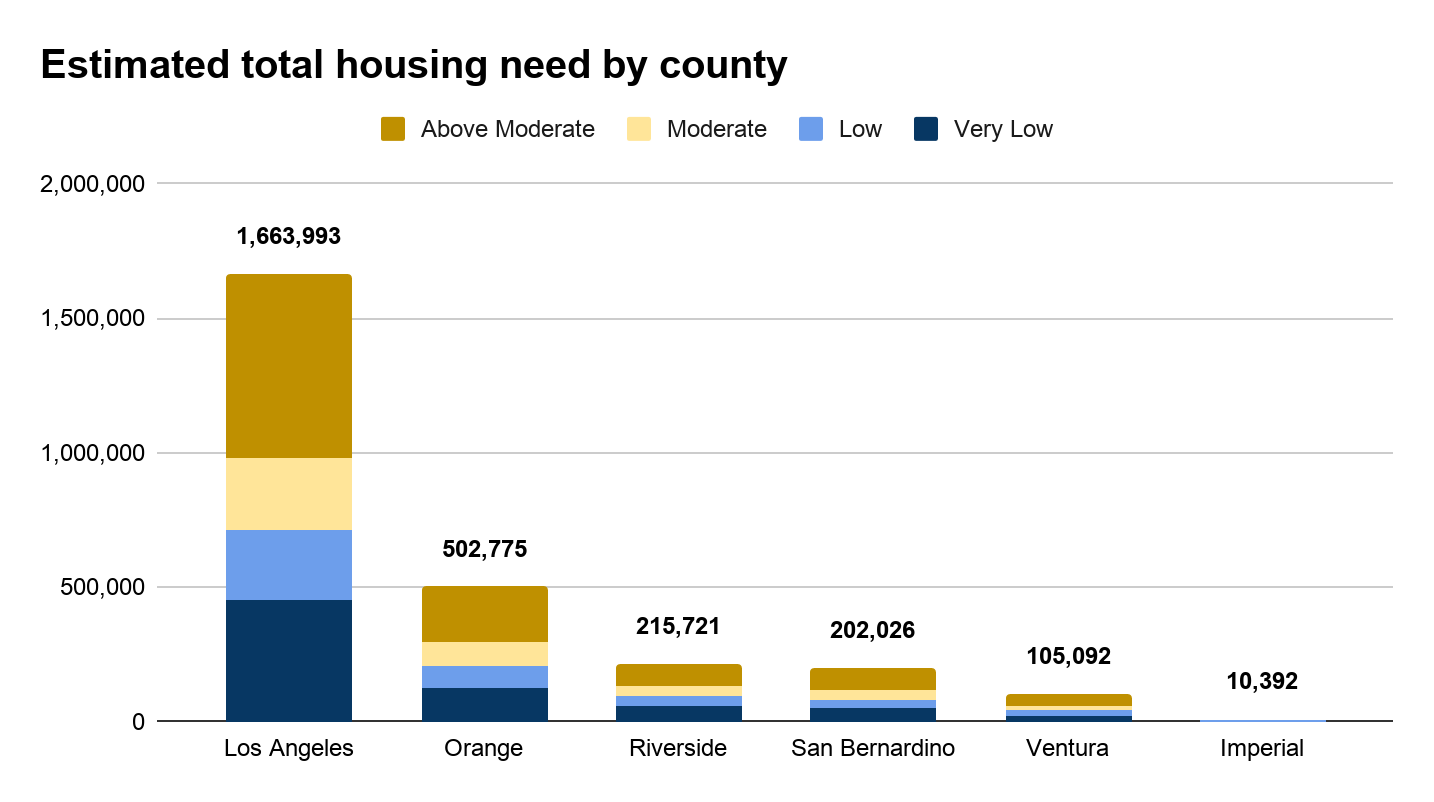 Producing 700,000 homes would be expensive under any circumstances, but is particularly pricey in California because of the high cost of land, labor, and construction materials, as well as fierce neighborhood opposition to new affordable housing. Assuming an average per-unit cost of $420,000, it would cost nearly $300 billion to construct 700,000 units of affordable housing, or $37 billion per year throughout the upcoming 8-year RHNA planning cycle. This spreadsheet contains additional detail and sourcing for this estimate.

Everyone has the right to affordable housing that meets their needs, and so it is crucial that our leaders commit to producing this affordable housing. To that end, Abundant Housing LA is calling for $100 billion per year in state funding for housing.

While governments must play a major role in funding affordable housing production, they can’t meet this need alone. Even if local, state, and federal governments were to fund 20% of the capital costs for affordable housing, relying on nonprofit and private capital for the remaining 80%, the cost to governments would still be $60 billion, or $7.5 billion per year. As a point of comparison, the L.A. County annual budget is $35 billion, and the City of Los Angeles has proposed an annual budget of $10.5 billion this year. Unfortunately, the COVID-19 related economic downturn has put additional pressure on government budgets; the City of Los Angeles is close to declaring a fiscal emergency.

Given these significant challenges, an ambitious, “all of the above” policy strategy is needed in order to build 700,000 more affordable homes throughout L.A. County. Local and state governments should raise new revenue sources and create housing on municipally-owned property, while also implementing major land use reforms and supporting efforts to reduce the astronomical cost of building housing.

An “all of the above” effort should include:

With an affordable housing gap this large, Los Angeles County can’t afford to tinker around the margins. The road to 700,000 more affordable homes starts with a commitment to bold, transformative solutions from our policymakers.

An Updated Guide to Zoning in Los Angeles

by Isaac Gendler | Sep 9, 2020
This article is an update to the previous A Short Introduction to Zoning in Los Angeles. It was written in a time before the rise of the YIMBY movement and its effects on California State Housing Policy. There’s a fierce debate about the nature of housing going on in the state of California right now. […]