2021 is a year of historic progress on housing reform. Abundant Housing LA is fortunate to be at the forefront of many battles that helped bring these victories to LA County and California. Read on for some highlights from this rewarding year!

A message from Leonora 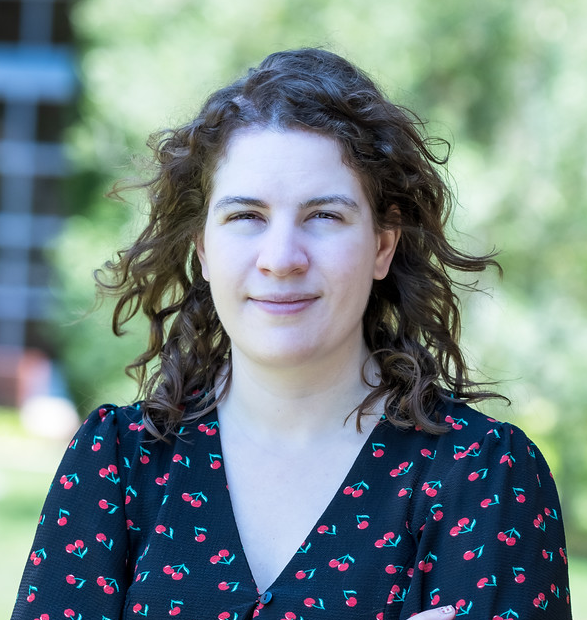 2021 was a year of major housing victories. Building on our 2019 victory of the Coastal Plan for Southern California, a plan for 1.4 million homes concentrated in high-cost coastal areas, we’re ensuring that every city in the County has a realistic plan for implementing these goals as a part of what’s called the Housing Element process.

Because of the consistent advocacy from pro-housing residents, the City of LA is going forward with a bold housing element to create dramatic increases in capacity and housing production – a rezoning plan that will include more than 250,000 as a production target, and will create more than 1.4M increase in capacity. The City of LA has also committed to an equitable distribution of housing planning that addresses racism associated with historical urban renewal policies and segregationist housing policies, the effects of which continue today. We plan to continue our advocacy to ensure that the city successfully implements these programs in a way that is impactful for Angelenos.

AHLA has sent housing element comment letters to every city in the County, and has been advocating directly to the Governor to uphold strong standards under state law for housing elements. We’ve also partnered with MapCraft to create an economic analysis of ten cities’ housing elements, exposing unrealistic claims about future housing growth in these plans. In response, HCD sent lengthy warnings to cities and cited data from Abundant Housing LA. 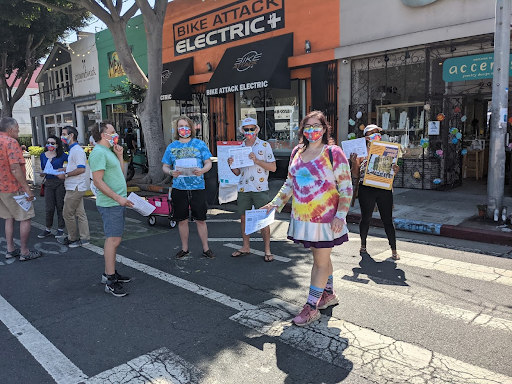 Our coalition and partnership on housing element advocacy have been getting results: most notably, the City of Los Angeles adopted a best-in-class housing element, where they committed to rezoning enough land to encourage the building of over 250,000 more homes by 2029. In Culver City, AHLA successfully advocated for a housing element resolution that would guide a strong plan for housing growth in the city. And thanks to our comment letters, HCD required Long Beach, Santa Monica, Whittier, and Pasadena to correct unrealistic claims about future ADU development in their housing elements. As more housing elements are certified, the transformative Coastal Plan becomes closer to reality.

AHLA has also become more active in state legislation. In 2021, we co-sponsored AB 1401, a bill to reform local parking requirements, and mobilized members to support SB 9 and 10. The victories of SB 9 and 10 were a major victory and a symbolic renouncement of the exclusionary single family zoning, driving housing scarcity and high costs throughout the state.

Finally, AHLA formed a PAC, and is planning to make endorsements and campaign for pro-housing candidates in 2022.

In order to make a difference in the 2022 elections, we will need all hands on deck! Please get involved in volunteering and campaigning for housing change.

Thank you all for making a major difference for a better housing future!

EYES ON THE PRIZE 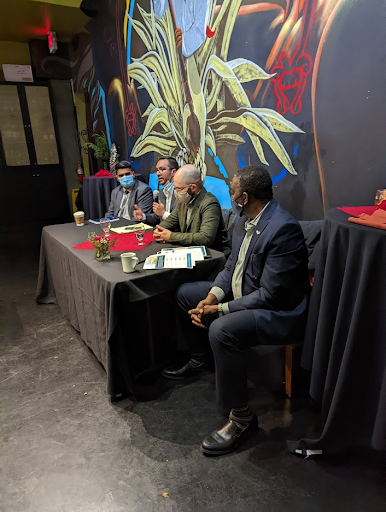 AHLA remains focused on supporting high-impact pro-housing legislation in 2021 while continuing to support individual housing projects through our project advocacy arm. At the state level, we thoughtfully vetted this legislative year’s housing bills, ultimately concentrating our support on 15 impactful bills, of which 6 were signed into law. This includes long-awaited reforms that pare back exclusionary zoning, such as SB 9 and SB 10, and legislation that strengthens housing element law, such as AB 215. The combined impact of these new laws is substantial. SB 9 alone enables about 126,000 new homes in LA County.

Locally, AHLA and our chapters supported 38 pro-housing city council items in 6cities. This is in addition to our housing element advocacy, for which AHLA sent comment letters to cities in LA County, urging them to follow the strong guidelines set by HCD and create a transformative plan of historic housing growth. We focused our efforts on 15 priority cities, encompassing the county’s highest-opportunity neighborhoods. For 10 cities, we partnered with MapCraft, an economic and policy analysis firm, to undertake a parcel-level analysis of these cities’ housing elements. Our research provides convincing evidence that these cities aren’t creating the conditions for achieving their RHNA goals, and that major improvements to their housing elements are needed. Finally, our research and policy director, Anthony Dedousis, was published on the San Francisco Chronicle editorial page, exposing local anti-housing practices and making the case for more robust housing element law enforcement.

Our hard work on housing element advocacy is paying off. Most notably, we successfully pushed the LA City Council to endorse a strong rezoning plan that will create additional housing capacity for 250,000 new homes. The Culver City Council also passed a strong resolution endorsing a high-quality approach to their housing element update, and expressed a commitment to legalizing apartments in more parts of the city.

Our housing element advocacy goes beyond working with local cities. We’ve been closely watching HCD’s enforcement of housing element law, and have mobilized members to send advocacy letters to HCD to ensure the department holds cities to high standards.

From San Pedro to Silver Lake, working in collaboration with local AHLA chapters and volunteers, AHLA advocated for 29 housing developments in 2021. This translates into 2,219 homes for families, including 316 income-restricted affordable homes.

Lastly, our successful advocacy to upzone R1 parcels in the “Bundy Triangle” to R3 back in 2018-2019 has resulted in 455 proposed new apartment homes in place of 16 houses just south of the Expo/Bundy rail station. This demonstrates that even very limited rezoning can bring a substantial number of new homes to the job-rich Westside. We are reaffirmed that with strong housing elements, cities countywide will be able to realize historic housing growth we desperately need.

In 2021, we’ve driven more than 3,524 advocacy actions. 482 people took action with us for the first time – that’s 482 new people who joined the pro-housing movement! Overall, 1201 people have joined our contacts list. We advocated for over 2219 new homes, including over 316 affordable homes.

Like what we achieved in 2021? Join our movement to house LA.

AHLA, along with 70+ ally organizations, launched Our Future LA in April. This is our County’s broadest coalition yet to advocate for more affordable housing, renter protection, and homelessness prevention. As part of the coalition’s steering committee, AHLA helped mobilize coalition members on supporting SB 679 and strong housing elements. Specifically, coalition members weighed in on 13 housing elements with an average of 25 organizations signing onto each advocacy letter. While the coalition’s top priority, SB 679, wasn’t successful this year, we recognize the significant groundwork that was laid down, which will ultimately help the coalition secure future wins.

Last year around this time, AHLA had 7 active local chapters. One year later, our network of local advocates has grown to be 18 chapters/coalitions strong! This is all thanks to our organizing team and our 379 volunteers. 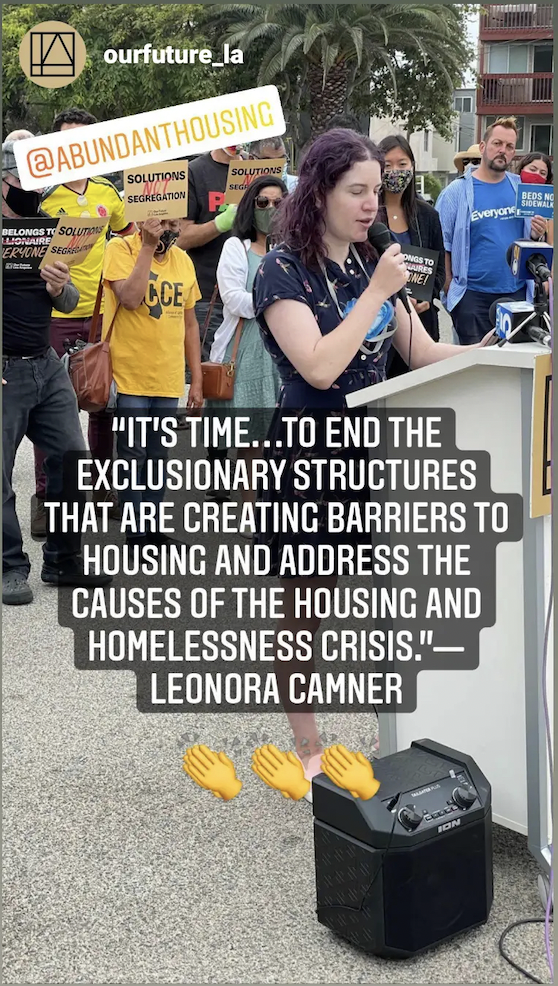 Here are some locations where you can find AHLA volunteers as chapters, or as part of a coalition:

AHLA IN THE NEWS

AHLA made the news 10 times this year! We have been published or interviewed by 8 publications, including heavy hitters such as the LA Times, Streetsblog Los Angeles, Streetsblog California, and the San Francisco Chronicle. You can find us in the news here.

We loved bringing together experts from diverse sections in housing to engage in thought-provoking conversations with the public, which is why we produced 11 webinars this year, including housing panel discussions and Housing 101s. Because of our efforts, 666 people learned more about housing history, housing policy, exclusionary zoning, solutions to homelessness, innovation in housing, and how housing and climate policies intersect. Another 464 viewed our webinars 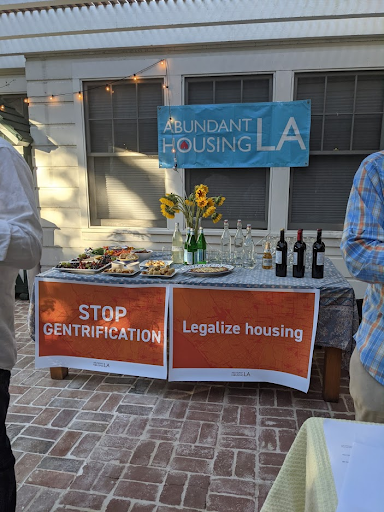 We also got to organize some small but fun in-person events! 194 Angelenos RSVP’d to attend our events, including happy hours and our annual comedy fundraiser.

Our website received a total of 75,544 views this year to date. We’ve written blog posts on a wide range of topics including housing Where and for Whom, Chicago’s Equitable Transit-Oriented Development program, LA’s new anti tenant harassment ordinance, Austin’s Affordability Unlocked housing platform, LA’s migration pattern, What is YIMBYism, the flaws of community input, why only allowing housing growth along commercial corridors will not be enough, and of course, LA County’s housing elements.

Join our movement to house LA to stay updated on housing news and get involved with pro-housing advocacy.

We also revamped our website! Check out the new site here: https://abundanthousingla.org/

TAKING OUR MOVEMENT TO THE NEXT LEVEL 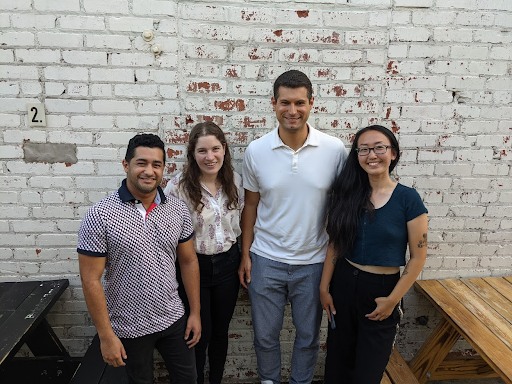 Our C4 arm opposed the governor’s recall, and made endorsements in local neighborhood council races, resulting in victory for local candidates including Charles Taylor for Central Hollywood NC, Nolan Gray for North Westwood NC, and SoRo Together slate for SoRo NC.

2022 is an important election year. In anticipation of elevating more pro-housing candidates in higher-profile elections, AHLA formed our own Political Action Committee (PAC) in November! Having a PAC will allow us to educate more voters than ever about candidates’ housing platform, and make sure they make the right decision on election day. The C4 endorsement committee had already been busy researching and interviewing candidates.

2022 is looking very promising for our movement to house LA. Some items we are most excited about for next year include:

Thank you for being part of this movement! Your support is critical to our mission. Together we’ll end the housing shortage and house all of LA.

Like what we achieved in 2021? Join our movement to house LA.