What Are the COVID Rental and Housing Policies, and How Would They Help Los Angeles?

Very few individuals could have foreseen the COVID epidemic. Starting from the arrival of the first officially diagnosed case in Los Angeles County in January, the virus had spread in the population until a state-wide stay at home order was issued for the county on March 19th. Since then, over 60,000 individuals have been confirmed to have been infected, more than 2,500 people have lost their lives, and billions of dollars in economic losses have ensued. Nearly 25 percent of Californian workers are now unemployed, a number matching the height of the Great Depression. Communities of color and lower-income individuals have taken on a disproportionate share of this burden. Black residents of Los Angeles have died from the virus at a rate over 56 percent higher than their share of the population and Latinx residents are forced to work in person at essential jobs at a rate far higher than other ethnic groups. All of this combines to make paying rent much more difficult.

Taking heed of this, the Los Angeles County, Californian, Federal Governments have passed legislative action to assist Californian taxpayers with their bills. The following is a concise list of them.

This piece of legislation stipulates that

Unfortunately, people who typically don’t file a tax return will not receive a package until they file, and individuals without a social security number and U.S citizens who are married to one are excluded from receiving a check. In addition, The CARES act also freezes student loan interests until the end of September and helps expand unemployment benefits by giving individuals an extra $600.00/week for the first month of enacting.

Given that the average rent in Los Angeles is $2,524, this stimulus check will not be remotely enough to cover the cost of living. This pales in comparison to other countries around the globe, where Canada is paying its citizens $1,433 USD per month, South Korea is covering 70% of worker’s salaries, Denmark 75%, the U.K 80%, and The Netherlands 90%. Given the vast number of newly unemployed workers and the high cost of living in Los Angeles, it would only be logical for more action to be taken.

According to the Los Angeles Housing and Community Investment Department, a building is able to be protected under the rent-stabilization program if it is an apartment that is built on or before October of 1978. This usually means that the rent can only be raised by a maximum of 4% every year. But with the advent of the COVID epidemic, many Los Angeles city residents, particularly lower-income tenants that make a disproportionate share of rent-stabilized apartments, are losing substantial income. On March 30th, 2020, Los Angeles Mayor Eric Garcetti announced a freeze on rent-hikes on all 624,000 units of rent-stabilized apartments. Later the LA City Council had extended this measure to an entire year following the emergency.

The tenants are required to leave a written notice no more than 7 days before rent is due that they are unable to pay the rent. Eligible reasons for the inability to pay include lost wages due to the Coronavirus epidemic, becoming ill with the Coronavirus, or being forced to take care of someone ill with the coronavirus.

Sensing that complications could arise from having to provide a written notice, Los Angeles County issued an ordinance on March 19th to expand the ruling to all residential and commercial developments in unincorporated Los Angeles County. On April 14th, this ordinance was expanded to all jurisdictions in the county unless they already have adopted their own moratorium. In early May, these were extended to the end of June. What comes after is still up for legislators to decide. Other components of this ordinance include a ban on no-fault evictions (an action where landlords can terminate a tenant’s lease for any arbitrary reason even if they paid rent on time and acted without a problem) and Ellis Act evictions for two months until after the emergency ends (where a landlord may wish to tear down a rent-controlled building to place it off the rental market). Although temporary, these measures will afford extra protection to renters.

With these pieces of legislation, Los Angeles renters will be able to have at least some form of assistance for weathering the pandemic. Although the federal stimulus is too light and the rent stabilization ordinance and evictions moratorium is only temporary, at least some action is being taken. Moving forward, more protective actions will need to be taken to ensure that all residents of Los Angeles will be able to not only survive the pandemic but thrive afterward. 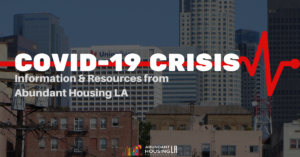 Your rent. Segregation. The freeway network.

LA's history of exclusion in housing continues to affect our city today in more ways than one. Join to learn more about what happened, and what it means for you.

The Economics of Canceling Rent and Mortgages

by Isaac Gendler | Jul 6, 2020
It’s no surprise to anyone that the advent of a global pandemic is inducing a worldwide economic meltdown. For months offices have been turned into ghostly shells, busy city streets into silent lanes, and restaurant halls dormant all because coming into close contact with another person holds the potential to be lethal! This has caused […]

by Anthony Dedousis | Jun 10, 2020
This piece originally appeared in City Observatory.  Editor’s Note:  City Observatory is pleased to publish this guest commentary by Anthony Dedousis of Abundant Housing LA. Some elected officials and journalists have drawn a link between urban density and the spread of COVID-19. A few anti-urban pundits have gone further, arguing that suburban living patterns are reducing the spread of COVID-19, and using […]

Lessons from a Pandemic: So, what now?

by Mark Vallianatos | Jun 8, 2020
This post is the last in a four-part series: Lessons from a Pandemic. Read the third post here. What does this mean for housing post COVID-19? COVID-19 is different than influenza; and cities, demographics, communications, technology and other factors are different today than in the early 1920s. The impacts of COVID-19 on housing demand, construction […]