All summer long, Abundant Housing LA and YIMBY Law have been reviewing and commenting on cities’ housing elements, strategic plans for meeting a housing growth goal (the “RHNA target”) over the coming 8 years. Housing elements must encourage strong housing growth by identifying sites that are good for future housing, paring back restrictions on housing production, actively reversing patterns of economic and racial segregation, and if necessary, rezoning enough land to achieve the city’s RHNA target.

Most cities across Los Angeles County have now published draft versions of their housing elements and submitted them to the state Department of Housing and Community Development (HCD) for review. Some draft housing elements, including the City of Los Angeles’ “Plan to House LA”, are relatively well-designed and point the way to a more housing-abundant future. However, many cities, particularly higher-income jurisdictions like Santa Monica, Pasadena, and Beverly Hills, are pulling out all the stops to create housing elements that will do little to actually encourage more housing. They’re betting that HCD, the agency that approves or denies cities’ housing elements, will ultimately fold under pressure and decide not to enforce California’s housing element laws.

Fortunately, HCD is pushing back on some LA-area cities’ worst practices. The agency has started publishing comment letters on cities’ draft housing elements, and has demanded that these cities revise their housing elements to fully accord with state law. AHLA and our fellow housing element watchdogs have seen NIMBY cities try the same tricks over and over, and we’re encouraged that HCD is also paying attention to these violations.

Here are the five steps to a bad housing element, which both HCD and pro-housing advocates have called out as improper:

Step 1: Claim that housing will be built on sites where redevelopment is very unlikely.

Nearly every housing element that we’ve reviewed includes sites that have almost no chance of being redeveloped for housing in the next few years. Some examples are in especially bad faith: for instance, South Pasadena claims that tiny utility easements, vacant parcels of railroad track, and City Hall itself are good places for new housing. This violates state law, which generally requires cities to provide evidence that redevelopment of a site is likely.

We critiqued Redondo Beach’s draft housing element for claiming that hundreds of homes will be built on the North Tech District, a large section of commercial and industrial land where most of the city’s main employers, including Northrop Grumman, are located.

HCD’s comment letter also questioned this claim, and required the city to either provide convincing evidence that one-third of Redondo Beach’s jobs will move in the next 8 years, freeing up the land for housing development, or to propose rezoning other sites instead.

Step 2: Make unrealistically high forecasts of future ADU production, so that cities can claim they don’t have to rezone.

With recent changes to state law, ADUs have emerged as an important source of new, moderately-priced housing. HCD allows cities to count future ADU production towards a city’s RHNA target, but requires them to calculate the average number of ADU permits issued annually between 2018 and 2020, and extrapolate that number going forward.

For example, if a city permitted 20 ADUs per year between 2018 and 2020, then it can reasonably claim that the city will permit 160 ADUs over the next 8 years. This prevents cities from making unrealistically high forecasts of future ADU development, to support a claim that the city has enough capacity for new housing growth without rezoning.

Of course, some cities haven’t gotten the message. The worst offender is Santa Monica, which permitted an average of 26 ADUs over the past few years, but claimed that they will permit 80 ADUs per year over the next 8 years, on the grounds that “Santa Monica averages 80 ADUs per year” already. But that number triple-counts ADUs by lumping together all ADUs permitted, in progress, and completed in a given year. For example, the city would count a single ADU that was permitted in 2018, under construction in 2019, and completed in 2020 as 3 ADUs!

HCD wasn’t having it, either – their comment letter called out this error and demanded that Santa Monica correct it.

It’s not enough for a housing element to simply identify locations for new housing; they also have to commit to concrete reforms to make housing production easier. These reforms are needed in cities like Beverly Hills, which are very difficult places to build housing. The city requires Planning Commission review for all buildings with four or more units, which is an unpredictable process that can take over six months. Additionally, the city mandates heavy on-site parking requirements, large minimum unit sizes, and high fees on new construction, and bans apartments on almost 90% of its residentially-zoned land. These barriers help explain why Beverly Hills’ housing stock only grew 0.1% since 2015. 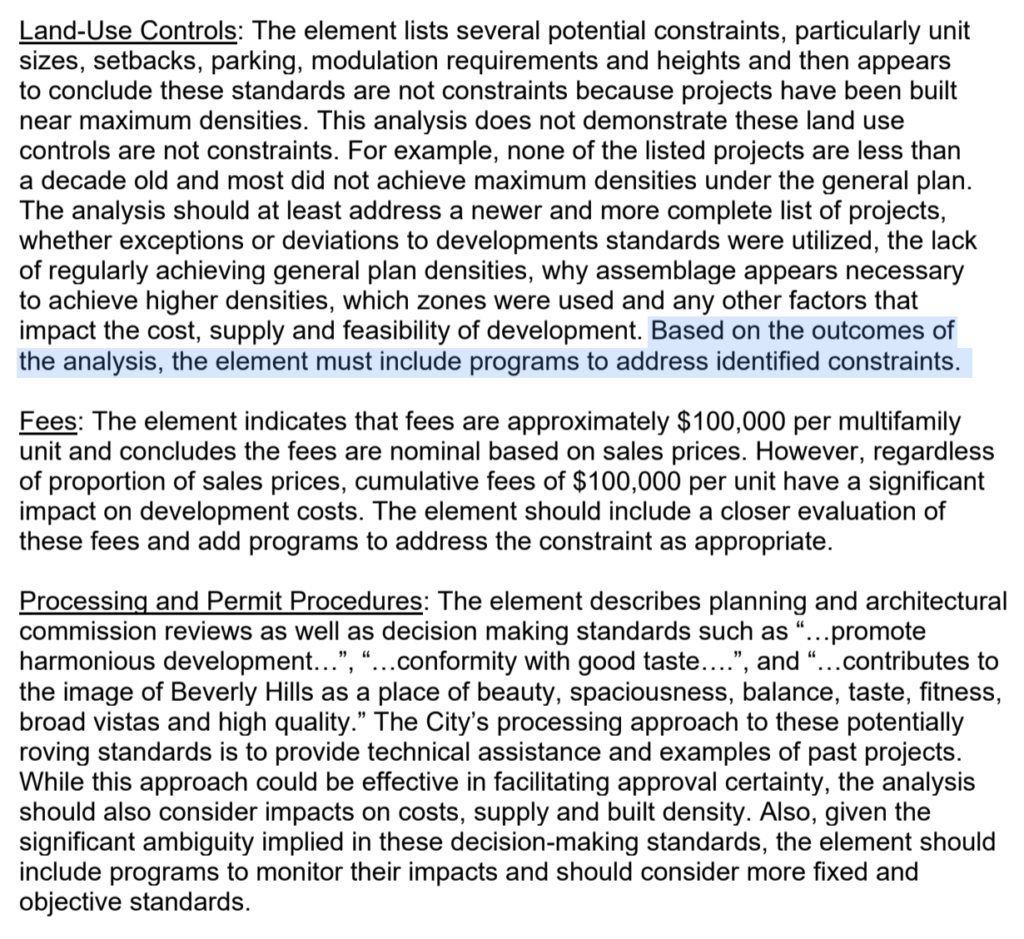 Step 4: Claim that all proposed housing projects will be built.

Cities may count housing units that are currently in the process of being approved or built towards its RHNA goal, since some of these projects will be completed during the upcoming 8 years. But as anyone who has ever tried to build housing knows, not every project that is proposed or permitted ultimately gets built. That’s why cities have to estimate how many proposed units will be completed, based on recent historical data.

Our comment letter on Los Angeles County’s housing element voiced concern that the County was essentially treating thousands of in-progress housing units as a sure thing:

HCD’s comment letter insisted that the County adjust this number down, based on the likelihood that these in-pipeline projects will be built:

Crucially, state law requires housing elements to affirmatively further fair housing, which is defined as “taking meaningful actions, in addition to combating discrimination, that overcome patterns of segregation and fosters inclusive communities free from barriers that restrict access to opportunity based on protected characteristics.”

This means that housing elements must not concentrate new affordable housing opportunities in lower-income neighborhoods or areas of segregation or high poverty. Instead, cities should plan for more housing in all neighborhoods, including well-resourced, higher-income areas that have historically been hostile to housing growth. This promotes inclusion of people of all backgrounds and income levels, and makes it easier for people of all walks of life to access high-quality transit, jobs, schools, and parks.

A core step towards affirmatively further fair housing is allowing apartments in well-resourced areas where zoning often mandates standalone houses only. Yet few cities have been willing to revisit exclusionary R1 zoning, despite the fact that most land in the cities of L.A. County is zoned R1. Every housing element comment letter that we’ve submitted calls on cities to legalize apartments, including affordable housing opportunities, in high-opportunity, low-density areas.

In particular, we called out the incongruity of Santa Monica’s housing element, which talks a big game about the need to rectify patterns of discrimination in housing, but takes few actions to pare back exclusionary zoning:

Now you know the five-step NIMBY playbook for creating bad housing elements, which means that you can help us hold cities accountable as they finalize their housing elements this fall. And you can bet that AHLA and YIMBY Law will keep the pressure on NIMBY city governments.