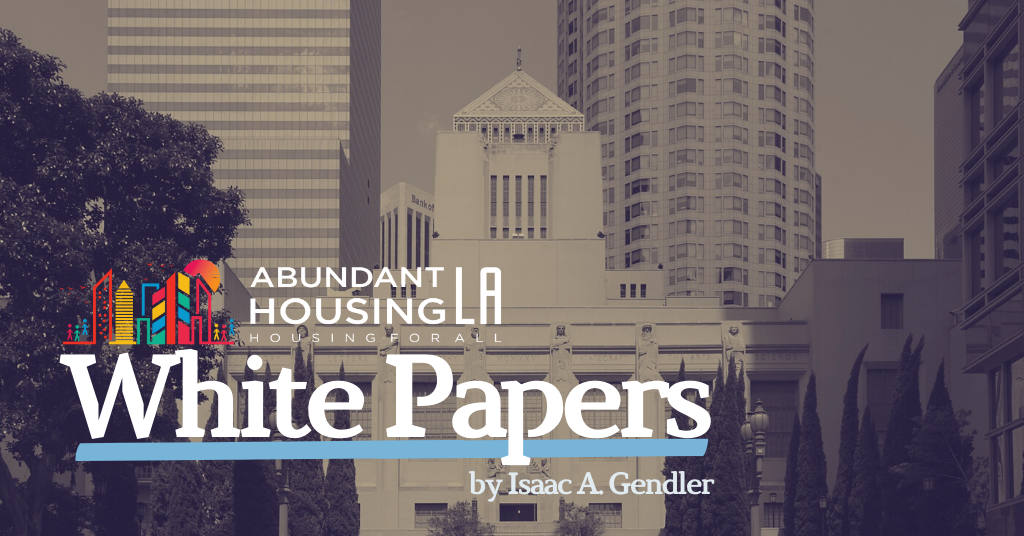 In the media from print to poster to picture Los Angeles is depicted as a city filled with teeming masses of automobiles. And to a large extent, this holds up to be true. In Los Angeles County alone, there are 7.8 million vehicles registered, and 3.9 million workers commute by car or carpool. And all of these machines are going to need a place to park. Because of the intrinsic link between automobile needs and city design, parking placement has found its way into Urban Planning. Developing in Los Angeles requires that a certain amount of land is set aside for parking according to a certain set of parking rules.

So how does this exactly work?

Well, the first step is determining what type of structure the project is.

The most straight-forward rules are those for single-family homes on standard elevation. There simply needs to be 2 parking spaces per unit, usually taking the form of the garage. If the single-family development on a narrow lot (40 ft. or less), not abutting an alley, then it requires only one parking space.

Hillside development located on a substandard street (a street which does not have a minimum dedicated width of 36 ft. and a roadway of 28 ft.) and exceeds 2400 sq. ft. of combined floor area is usually more complicated. Since parking in these regions is tricky, the development will require one additional parking space for each 1000 sq. ft. or fraction thereof for a maximum of 5 total spaces.

As one can see, these requirements place an immense burden on multifamily residential developers to purchase and set aside large amounts of land for parking use. One study found that on average the land costs amount to $4,200 per unit and $1,600 for construction. To put this into perspective, if 120 units of parking have to be provided this will roughly translate into $696,000 for costs! The pure expense of this made certain development forms such as missing-middle housing economically infeasible, leading to the demise of their construction once the post-war parking rules were imposed. This further prevents the construction of dense and affordable housing that Los Angeles really needs.

For this reason, affordable housing, the specialized Central City Parking District, and the Cornfield Arroyo Specific Plan are far more flexible when it comes to minimum parking rules.

For the Central City Parking District in Downtown LA (pictured below), a developer simply needs to provide one parking space per dwelling unit, except where more than six dwelling units of more than 3 habitable rooms are present. In this case, the ratio for all such units should be at least 1.25 parking spaces for each dwelling of more than 3 habitable rooms.  To put this into perspective, if a development consist of 100 units of housing all with more than three habitable rooms, then only 125 units of parking will need to be provided instead of the 200 units that a development in a normal district would need 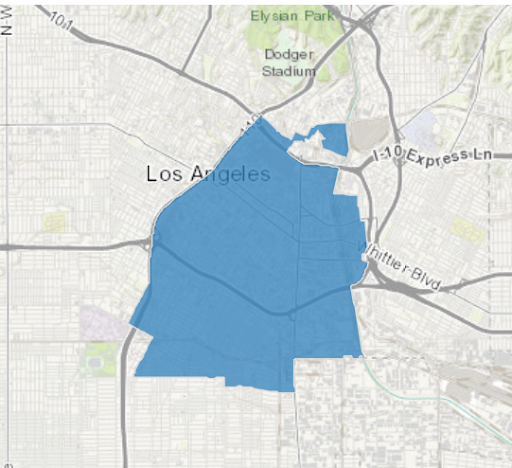 Location of the Central City Parking District, courtesy of The City of Los Angeles 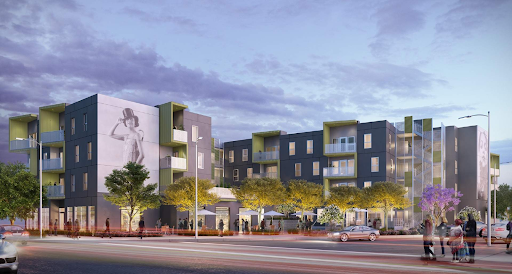 Example of an affordable housing development in Los Angeles. Link to source.

However, the most progressive zoning district in Los Angeles has to be the Cornfield Arroyo Specific Plan area. A development here needs no minimum amount of parking! This allows for projects to be much more affordable and take advantage of the transit-oriented nature of the neighborhood. 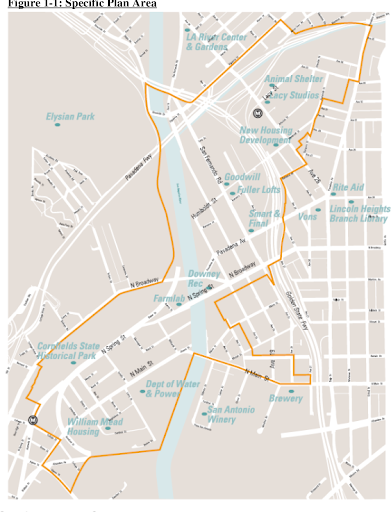 Parking space requirements for hotels, motels, boarding houses, and dormitories are fairly straightforward. The first 30 guest rooms will require one parking space per unit, the next thirty ½ space, and ⅓ space per unit afterwards. If the development is within the Central City Parking District, then this number is 1 for first 20, 1/4 for next 20, 1/6 for remaining. If the development is regulated as affordable, then all that is necessary is .25 parking space per restricted dwelling unit for single-room occupancy hotels, with a minimum of 5 parking stalls per project.

For guest rooms in the Central City Parking District, a developer needs to provide one parking space (per unit) for the first 20, 1/4 for the next 20, 1/6 for the remaining.

As one can see, Los Angeles has some stringent parking requirements which only adds to the car-centered urban design of the city. Parking is prioritized over people. Instead of adding housing and curating parks, large swaths of the city are dedicated to parking spots. Assets such as apartments and bike lanes are much more difficult to build with the post-war sprawl-focused mindset that the city can’t seem to shake off. The resulting deficit in housing leads to an increase in the unhoused population, whose life is made even more difficult by the lack of public transportation options available.

None of this work could have been completed without Jake Malott. Jake Malott is the President at Whitestone DCI, a Land Use Consulting and Development Services company specializing in density add solutions to increase a property’s value and ROI. Jake was able to use his experience in Los Angeles development to explain how parking rules work.

by Isaac Gendler | Nov 5, 2020
Introduction Why exactly do cities build new housing? The most probable answer to this question is that it is expected that more people are to move in as a result of new opportunities. And in the times before the onset of the COVID-19 pandemic, it was expected that people would have to travel from their […]

What Is Missing Middle Housing and the Purple Line Neighborhood Plan?

by Isaac Gendler | Jul 27, 2020
There seems to be a strong disconnect when it comes to ranges in housing discourse. If you talk to many people, you would probably think that neighborhoods are either rows of suburban-style single-family housing or a “manhattan-like” cluster of skyscrapers. However, there exists a nice happy medium in between these two extremes called Missing Middle […]