How an Urban Growth Boundary Could Impact Los Angeles

If you were to ask someone who lives outside of California what they picture in their head when they think of Los Angeles, a likely answer will be palm trees, Hollywood superstars, and dire urban sprawl. Whether Angelenos like it or not, Los Angeles’s Urban Sprawl is an intrinsic characteristic of the city’s image. Growing from a small colonial settlement on the frontiers of the Spanish Empire to a gargantuan metropolis containing four million souls in the central city, ten million in the county, and eighteen million in the greater region, spanning 503, 4,753, and 33,954 square miles for each three layers respectively was historically done with little to no oversight. The vast farmlands and plains that once dominated the LA basin were paved over during the 20th-century development boom to give rise to the buzzing streets and buildings that we know today. This has led to many parts of the LA region to become a concrete jungle, devoid of any connection with the natural world in a sea of gray infrastructure.

But do things have to continue this way? What if we could control development such that surrounding rural areas could be protected. This can come in the form of an Urban Growth Boundary, or a limit that separates how far an urban area can expand into the rural landscape. Urban growth boundaries have existed for a long period of time but became more prominent in the U.S when the State of Oregon enacted legislation requiring its cities to create an urban growth boundaries plan. Only vacant land that is inside these boundaries can be developed. Anything outside is completely off-limits to construction. If an urban region wishes to expand the urban growth boundary, then local legislation needs to decide on it and ensure that the new boundary complies with state-set norms.

To get a better understanding of how these plans have shaped Oregon’s urban form, A closer look can be seen below, comparing the Portland metro area’s urban growth boundary plan and a satellite view. 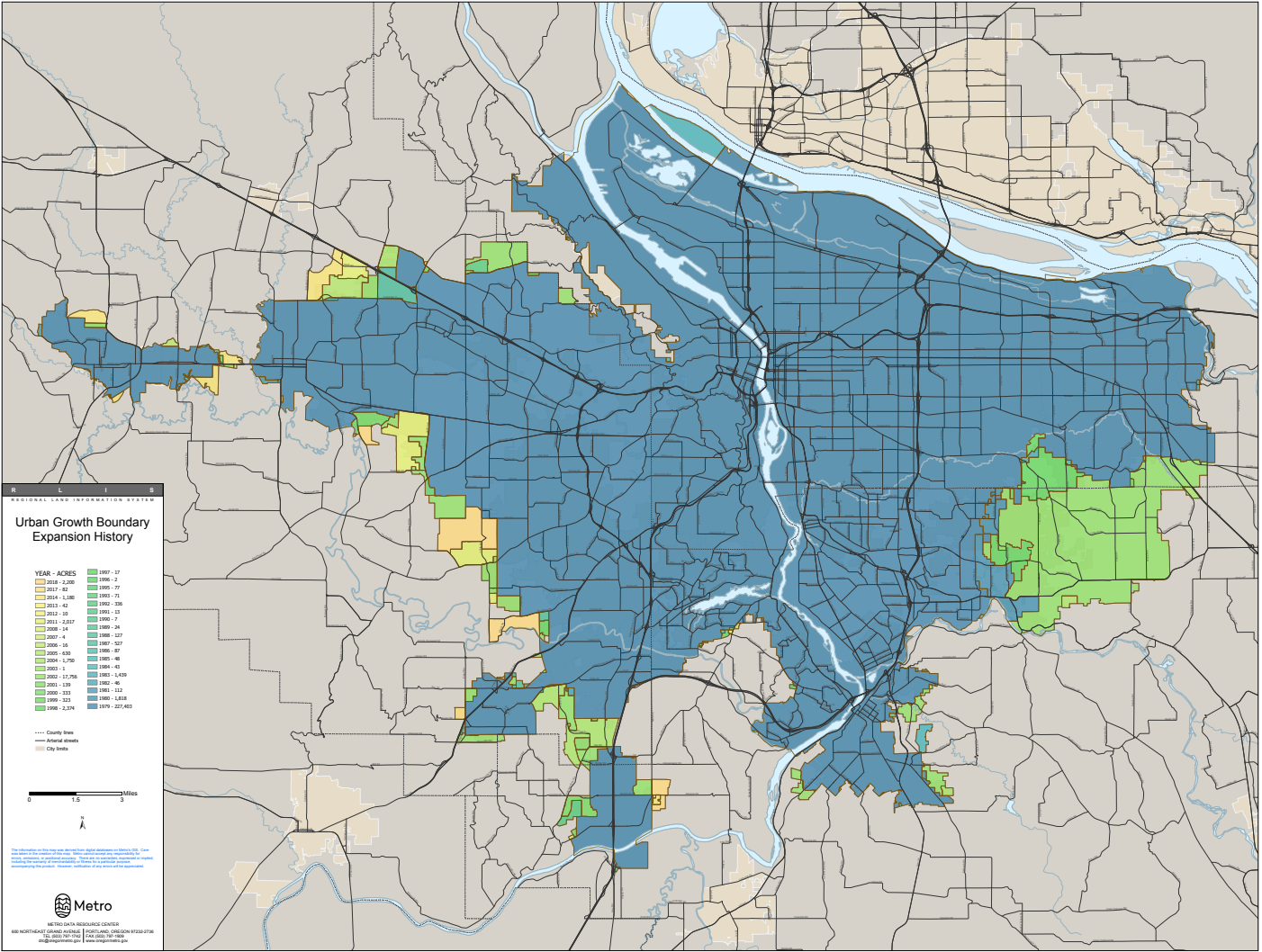 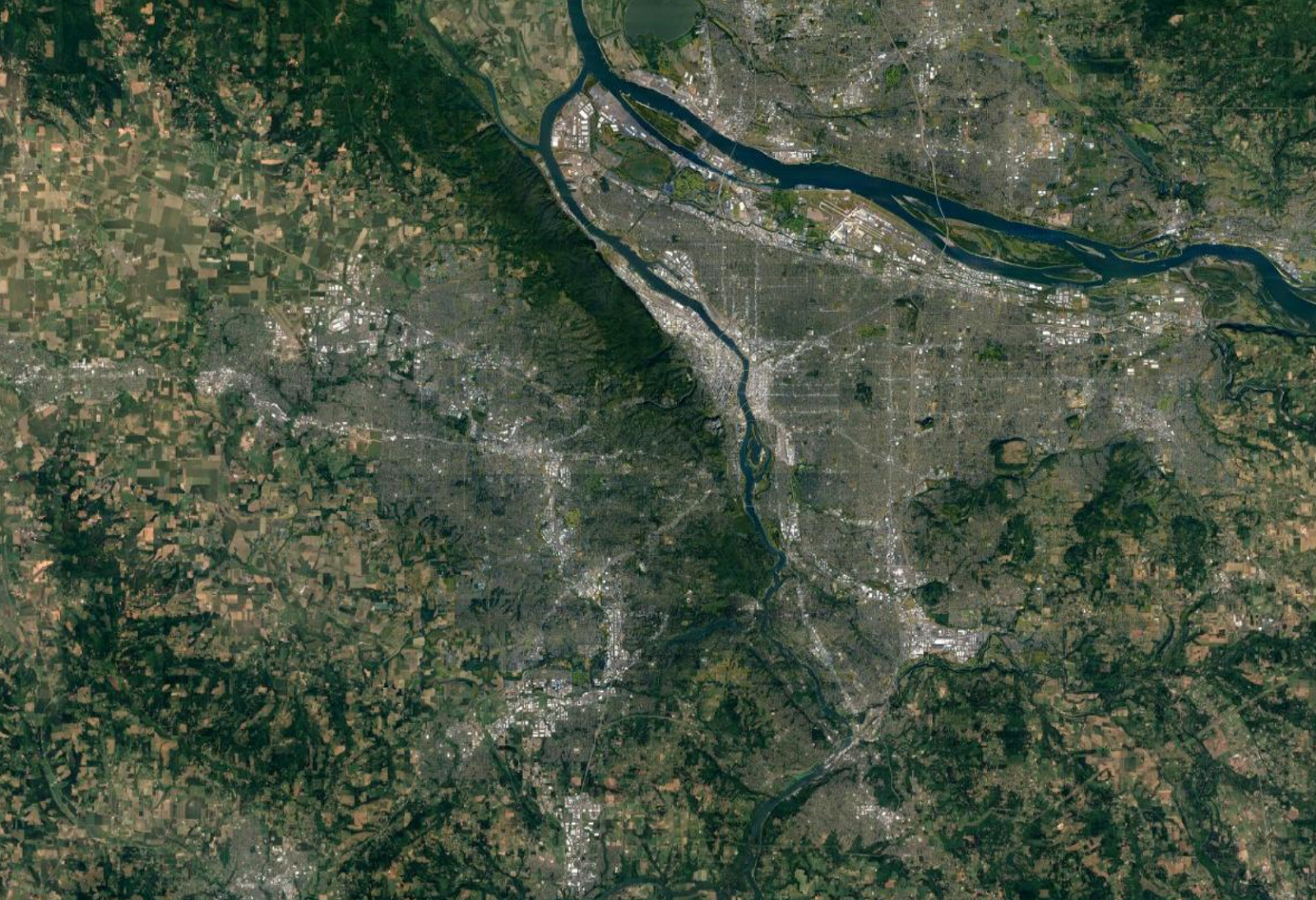 Since Oregon’s experiment, urban growth boundaries have spread to dozens of cities and counties all over the United States, from Seattle to San José to nearby Ventura County. However, how exactly has the adoption of urban growth boundaries impacted the cities themselves, and how would this affect Los Angeles? Let’s take a look at the positives and negatives.

One of the most touted advantages of establishing an Urban Growth Boundary is its ability to prevent urban sprawl. By limiting development to internal and nearby space, municipalities can have a greater focus on where they develop. A case-study completed on the city of Knoxville in Tennessee discovered that land within the urban growth boundary was less likely to be developed but within the city itself was more likely since its implementation, therefore achieving a more infill-focused paradigm.

Controlling urban sprawl will protect the natural space of the surrounding environment from encroachment by humans. Not only does this add quality of life benefits by ensuring that residents are close to nature, but also makes the municipality more resilient to future disasters. With the advent of climate change, weather conditions are becoming exacerbated and fertile for chaos. Overdevelopment into vulnerable areas can exacerbate this. One of the primary reasons why Paradise California was so devastated was due to its overdevelopment on land that was especially prone to wildfires. Similarly, Houston’s uncontrolled growth strategy led to the city building over floodplains with non-porous cement, making conditions ripe for the vast destruction unleashed by Hurricane Maria.

While urban growth boundaries certainly have their benefits, no public policy decision comes without drawbacks. Although these mandates might increase urban development within the city itself, it could lead to an overall decrease in available housing supply, shooting prices through the roof.

Portland, the poster child of the urban growth boundary, is perhaps also one of the most cited examples of this phenomenon. While the Portland Metropolitan has grown 10% by area since the implementation of its Urban Growth Boundary until 2018, its population has expanded by 78%. While a lack of horizontal urban expansion can be offset through vertical densification, Portland’s stringent height limits set to prevent views of the neighboring mountains from being blocked has led to a stagnation in new housing growth. Given the exponential increase in population, it’s only logical that the ever-present lack of supply has led to skyrocketing living costs. Adjusting for inflation, the cost of purchasing a house in the three-county Portland Metro urban growth boundary area from 1980 (when the urban growth boundary legislation was enacted) until 2018 had grown by 77% and in Multnomah County (where the city of Portland resides) by 105% . Furthermore, Portland’s urban growth boundary may have not effectively slowed suburbanization. In a 2003 research study determined that the restriction on house building simply led more residents to flee to other cities in search of a more affordable cost of living.

How Los Angeles could approach this

Just because there were some unintended consequences with earlier adoptions of urban growth boundaries does not mean that they would not inherently work out. The reason why previous implementations did not work out were most likely of already existing inequitable policies. Portland’s exploding cost of living was derived from a lack of existing housing supply and strict height-limit. One solution to this could be for Los Angeles and nearby municipalities to implement a massive city-wide rezoning in tandem with an urban growth boundary to ensure that development happens at a rapid-rate close to the core.

In fact, given the onslaught of climate change, urban growth boundaries may be one of the most equitable tools that municipalities have at their table. By restricting outward expansion, residents won’t have to be exposed to living on floodplains and wildfire-prone territory. The recent Apple Fire in Riverside was probably exacerbated by people moving to find an affordable place to live. Organizations such as The Greenbelt Alliance are doing pivotal work in ensuring that urban growth boundaries are just and equitable.

Urban Growth Boundaries are a peculiar addition to urban planning that holds great potential to achieve greater urbanization while preserving nature and increasing climate resilience capacity. But if implementation is not complemented with other progressive policies such as upzoning then they could lead to runaway housing costs and suburbanization. If municipalities in Los Angeles county can learn from the mistakes of the past, then these new forms may take shape to prepare our Southern California for the new climate paradigm.

by AbundantHousingLA | Aug 4, 2020
Los Angeles, August 4, 2020 — Leonora Camner, executive director of Abundant Housing LA released the following statement on fire season in Los Angeles and the growing threat posed by current housing growth patterns: “Southern California once again finds itself in the midst of a relentless fire season. The Apple Fire in Riverside County has […]