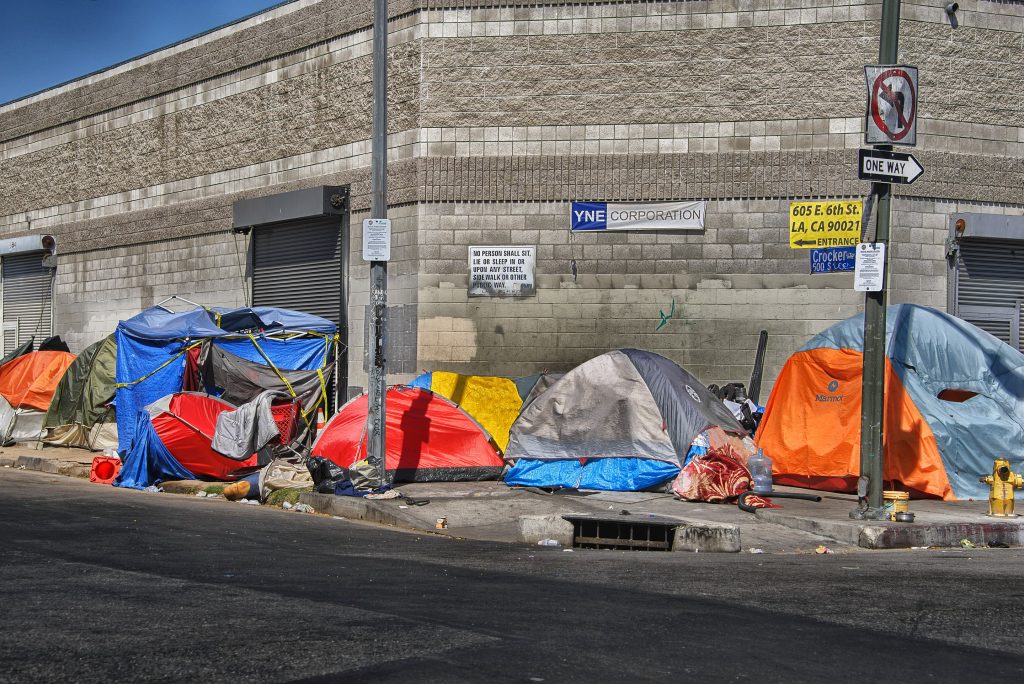 Every Angeleno knows that homelessness in Los Angeles has been at a crisis point for years. The tragedy on our streets has become even more salient as a result of the COVID-19 pandemic and Judge David Carter’s recent order in the case of LA ALLIANCE FOR HUMAN RIGHTS, et al. v. CITY OF LOS ANGELES, et al. The Judge’s order requires the City of Los Angeles and Los Angeles County to offer some form of shelter or housing to the entire homeless population of Skid Row by October, although it has been temporarily stayed by an appeals court.

Abundant Housing LA is committed to preventing homelessness in Los Angeles. That’s why we have supported many local and state policies that directly address homelessness, including Measures H and HHH. We have partnered with United Way and Inner City Law Center on a homelessness prevention project, leading to a broader partnership called Our Future Los Angeles. We have also educated our members on the unjust and discriminatory roots of exclusionary zoning and land use rules.

We appreciate that Judge Carter’s order has proposed concrete actions and outlined the long history of discriminatory policies that have contributed to segregation and homelessness in Los Angeles. We share the court’s impatience with avoidable deaths to unhoused Angelenos; with slow delivery of permanent supportive housing; with land use politics that allow a small, vocal minority of affluent residents to block badly-needed affordable homes; and with an artificial housing shortage whose roots lie in decades of downzoning and disinvestment.

Judge Carter is correct that Los Angeles’ homelessness crisis is rooted in its severe lack of housing. The pace of housing production in the City sharply decelerated in the early 1990s, largely due to downzoning and a growing spate of restrictions on multifamily housing production. Just 13% of the City’s housing stock was built within the past 30 years, and since 2013, the City’s housing stock grew just 4%.

Los Angeles’ pace of housing production over the past 30 years is also very low relative to the other large metro areas in the United States. 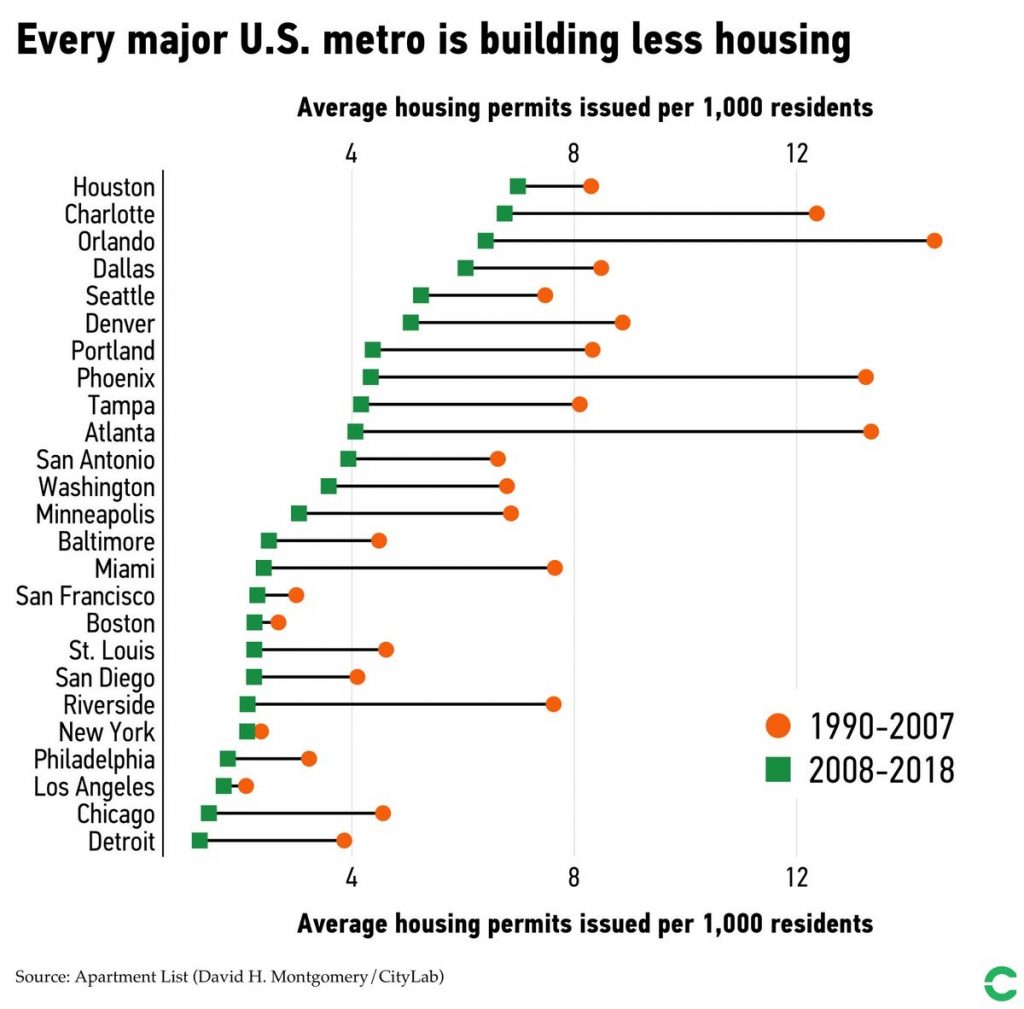 The housing production that does occur in Los Angeles tends to happen in the few areas where multifamily development is generally legal, such as Downtown, Koreatown, Westlake, and Hollywood. Apartments are banned on over 75% of the City’s residentially-zoned land, a proportion that is even higher in affluent parts of the Westside and San Fernando Valley.

This dynamic perpetuates historic patterns of socioeconomic segregation by blocking housing opportunities for low- and moderate-income households in high-income neighborhoods. Between 2009 and 2018, just 14% of new affordable homes were permitted in high- and highest-resource census tracts, even though these areas make up 35% of the City’s total census tracts. This is because apartments are banned on 76% of the residential parcels in these well-resourced areas, a function of exclusionary zoning. By contrast, 35% of new affordable homes that were permitted during that time were located in census tracts with high segregation and poverty. These areas allow apartments on 82% of their residential parcels. 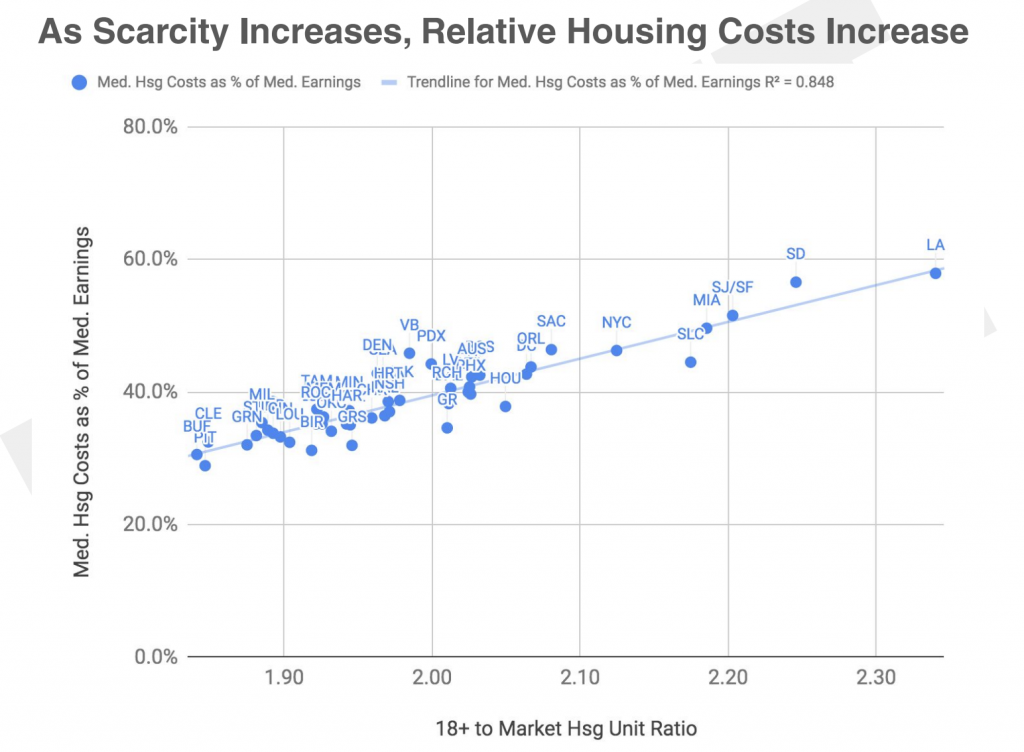 Study after study have found that high housing costs, rents, and poverty rates, as well as below-average homebuilding, all correlate with high homelessness. Other research has shown that increasing the vacancy rate in the housing market by a small amount can significantly decrease homelessness. A 2019 comparison of the homeless population across American cities shows that Houston and Orlando have the fewest residents per capita experiencing homelessness; these cities also have some of the highest housing production per capita over the past three decades. Over the past decade, Houston’s high housing growth helped hold rents flat despite a population boom, providing a tailwind for its successful “The Way Home” program of coordinated service provision and rapid rehousing. These two factors together led to a 60% decrease in homelessness in Houston.

All this illustrates the need for strong housing growth at all levels of income to solve homelessness in Los Angeles. We strongly agree with Judge Carter’s contention that: “Without major rezoning initiatives, Los Angeles will continue to lack the infrastructure to meet the homelessness crisis and stem growing housing insecurity.” We are also pleased that the order called for an ambitious, transformative approach to Los Angeles’ upcoming housing element update, which requires the City to plan for 456,000 new homes by 2029, including 184,000 that are affordable to lower-income households.

The housing element update is an opportunity to promote greater affordability, equity, and sustainability through housing abundance. We must reform zoning and land use regulations in a way that increases housing choice and availability, improves access to job centers and transit, and affirmatively furthers fair housing. This requires high-opportunity neighborhoods to accommodate more housing opportunities, including those that have historically blocked new housing through exclusionary zoning.

This is why Abundant Housing LA, alongside a coalition of 20 organizations representing the policy, academic, environmental, business, social justice, and affordable housing communities, has called for a housing element update that distributes the citywide 456,000-home goal to each of Los Angeles’ community plan areas in a fair, equitable way.

The City should set housing growth targets for each CPA, based on objective, quantifiable criteria like housing costs, median income, access to transit, proximity to job centers, access to parks and schools, patterns of historical exclusion and segregation, and environmental quality. Neighborhoods that score higher on these dimensions would be assigned higher housing growth targets, in order to collectively achieve the citywide 456,000-home goal.  This also aligns with Council President Martinez’s motion calling for “an equitable distribution of new housing around the city based on high quality jobs, transit, and historic housing production.”

We also recommend instituting policies that make housing faster and easier to build:

This approach to promoting citywide housing growth would increase housing affordability, improve access to jobs and transit, open up exclusionary neighborhoods to Angelenos of all backgrounds, and foster economic recovery from the COVID-19 pandemic. This would also align with the legal requirement for housing elements to affirmatively further fair housing; just last month, the state Department of Housing and Community Development (HCD) issued detailed guidelines that clearly require cities to promote lower-income housing opportunities in high-opportunity neighborhoods.

A clear majority of Angelenos reject NIMBYism and support more housing opportunities, including in locations where apartments are currently banned.

Finally, building more housing is necessary, but not sufficient, to end homelessness. We must also adopt policies that promote safe, stable permanent housing for Angelenos experiencing housing instability or homelessness:

Judge Carter’s order is a long-overdue wakeup call for our city. Our leaders must adopt bold, forward-thinking policies that solve homelessness by addressing its root causes. We must embrace the opportunity to promote strong, citywide affordable housing growth, in order to make housing affordable and abundant for everyone who calls Los Angeles home. Abundant Housing LA stands ready to collaborate with the City on this critical effort.