Op-Ed: Los Angeles is building plenty of housing … for cars 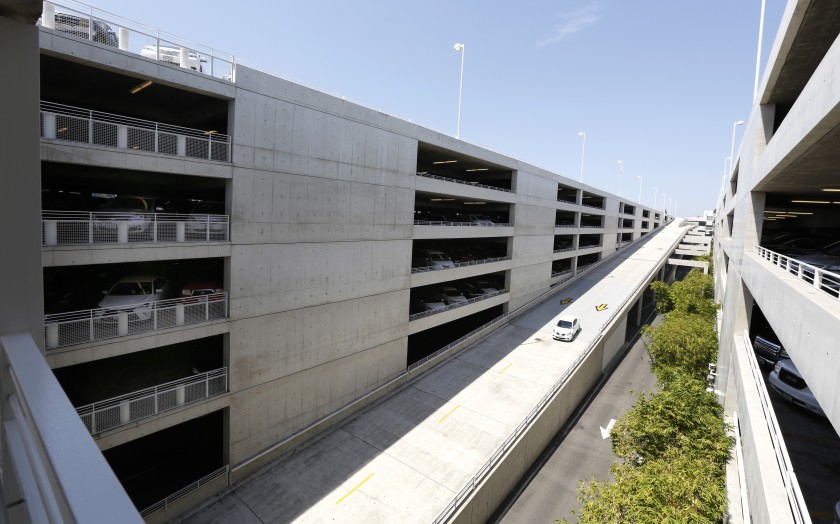 This article originally appeared in the Los Angeles Times.

Everywhere you look in Los Angeles, there is parking.

The data back up this observation. L.A. has almost 6 million parking spaces, or 1.5 for every resident, including children. In downtown, our city’s most walkable, Metro-accessible neighborhood, there are about 400,000 spaces. If every downtown resident and worker parked at once, there would still be more than 100,000 open spaces.

We’ve literally paved paradise and put up a parking lot. Why?

Because it’s the law. In L.A., most buildings are required to provide on-site parking, a policy known as mandatory parking minimums. In almost every part of the city, apartments must include one or two parking spots per unit, depending on the unit’s size. Most commercial properties must offer one space for every 100 to 200 square feet, forcing many businesses to provide more space for parking than for the business itself.

L.A.’s Department of City Planning recently proposed a much-needed step away from this destructive rule. As part of a farsighted plan for downtown that would encourage the development of thousands of new apartments and jobs, mandatory parking minimums would be eliminated. Instead, downtown builders would be free to decide how much parking to offer.

This is great news for downtown, and for our city, because mandatory parking minimums have made L.A.’s most serious problems harder to solve. Parking minimums increase traffic, smog and carbon emissions by encouraging car dependency. When people anticipate that their destinations will have space for their cars, they’re likelier to choose driving over walking or transit.

Parking minimums also worsen our housing crisis. On-site parking reduces the housing supply by taking up space that could otherwise be used for additional apartments. Also, providing on-site parking is expensive, costing $27,000 to $35,000 per space to build in L.A. This cost is passed on to renters and home buyers, regardless of whether they own a car.

Ending parking requirements downtown would be a welcome departure from decades of car-centric planning choices. But it’s still not enough: even with no minimum requirement, developers will probably still err on the side of building too much parking.

Instead of simply removing parking minimums, L.A. should introduce parking maximums downtown. New buildings would still be allowed to construct on-site parking, but only up to a limit. Developments requiring more parking than the maximum could lease it from existing buildings and garages with surpluses. Additionally, a tax on new spaces could finance public infrastructure improvements, such as protected bus and bike lanes, parks, and pedestrian amenities — reducing the need for driving altogether.

By replacing parking minimums with maximums, L.A. would be following the lead of cities such as London, Oakland, San Francisco and Mexico City. This approach is effective: After London reformed parking regulations, new residential buildings included 40% less parking.

And why stop with downtown? L.A.’s housing and transportation problems are citywide. Pollution and high rents don’t stop at neighborhood boundaries. Given the existing oversupply of parking throughout L.A., building even more parking would be like bringing sand to the desert.

It’s time to eliminate parking minimums throughout L.A. and introduce parking maximums near all Metro stations.

Of course, this bold action would face long political odds. L.A.’s transit network still leaves much to be desired — and even modest recent attempts to prioritize transit at the expense of cars have been met with rage from angry drivers. With L.A. City Council elections this year, any council member proposing a move as bold as parking maximums would naturally fear political pushback.

But voters’ frustration is already boiling over. In a recent Los Angeles Times poll, voters cited homelessness, housing affordability and traffic congestion as the city’s most pressing issues. Ambitious parking reform could strike a blow against all three problems at once, without costing a penny.

L.A. needs its leaders to take a stand. We have enough homes for cars. Let’s prioritize homes and mobility for people.

Check out our video on this topic:

by Isaac Gendler | Nov 5, 2020
Introduction Why exactly do cities build new housing? The most probable answer to this question is that it is expected that more people are to move in as a result of new opportunities. And in the times before the onset of the COVID-19 pandemic, it was expected that people would have to travel from their […]