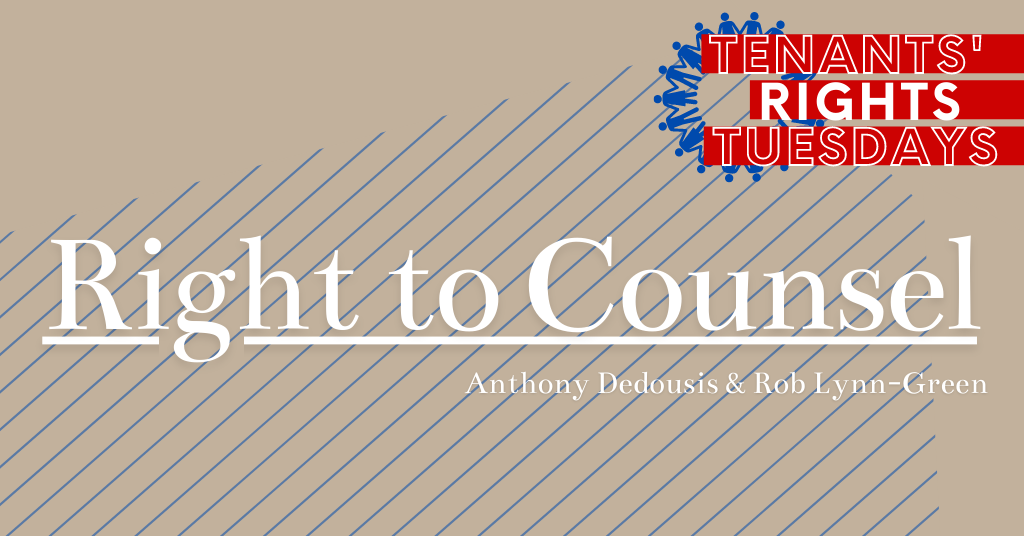 Our region’s housing crisis and lack of affordable housing put lower-income tenant households at serious risk of eviction. It is common for unscrupulous landlords to illegally or unfairly evict tenants, and most tenants are unable to fight back. Advocates estimate that 85% of tenants in L.A. have no legal representation in housing court, while landlords almost always do. As a result, landlords generally win eviction cases, and many tenants do not even bother to try to defend themselves against eviction.

Evictions have devastating consequences: families that experience eviction subsequently have higher rates of job loss, less access to good schools, and a higher chance of becoming homeless. Eviction also makes it much harder to find new housing, because landlords often refuse to rent to tenants who have been evicted in the past. Research also indicates that Black women face the highest risk of eviction, compared to white and Hispanic women.

Abundant Housing LA believes that in order to guarantee a fair trial in housing court, lower-income tenants must have access to free legal representation, in the same way that our society guarantees defendants in criminal cases the right to an attorney. Legal aid societies and tenants’ rights groups attempt to fill the gap admirably, but they are overwhelmed by demand for their services.

Los Angeles should fund a right to counsel (RTC) program, which would provide free legal representation in housing court to all lower-income tenant households facing eviction. This would ensure that all tenants receive legal advice before appearing in housing court and representation during court appearances. This would help tenants avoid eviction and punish illegal conduct by landlords. In cases where eviction is unavoidable, legal representation can help tenants negotiate a better settlement and more time to find a new home.

An RTC pilot program is already helping tenants in New York City. The program was launched in 2017, providing free legal representation to lower-income tenants in 20 ZIP codes. By late 2018, 56% of tenants facing an eviction in RTC ZIP codes had an attorney; in 2013, only 1% of tenants did. In 84% of cases where tenants were defended by an RTC attorney, they were able to remain in their homes. And evictions fell 11% in ZIP codes where tenants could access RTC, compared to a citywide drop of just 4%. By 2022, the program will be rolled out citywide.

Besides being the right thing to do, Right to Counsel can save money. A 2016 cost-benefit analysis found that RTC would save New York City $320 million per year, even after accounting for legal costs. The savings come from preservation of low-cost affordable housing units, and from fewer households becoming homeless and needing access to shelters. RTC may also deter evictions in the first place; landlords are less likely to attempt to evict tenants if they are on an even footing in housing court.

It’s time for Los Angeles to guarantee the right to counsel. In 2018, the City Council proposed an RTC pilot program with $3 million in annual funding. Nearly two years later, the pilot remains unlaunched, despite an economic crisis that has put hundreds of thousands of Angelenos at risk of eviction. Los Angeles must launch a full RTC program to meet this need; such a program could cover all tenants earning less than 80% of the median income at an annual cost of $70-90 million.

Hundreds of thousands of our neighbors live in fear of eviction. Guaranteeing the right to counsel will help to protect them.

by Haley Feng | Jun 2, 2022
Affordable housing and rental assistance Public Housing Authorities administer the federal Housing Choice Voucher (Section 8) rental assistance program for very low-income households and sometimes other affordable housing programs such as publicly owned or assisted income-restricted affordable homes. Section 8 vouchers are transferable from city to city if you move, but you will have to go […]

by Anthony Dedousis | Dec 22, 2020
Under the California Tenant Protection Act of 2019 (AB 1482), evicting a tenant without “just cause” is forbidden for rent-controlled housing units. This limits the conditions under which a landlord may evict a tenant; typically, permitted reasons include nonpayment of rent, intentional damage to the unit, or illegal activity on the property. Additionally, “no fault […]