When the discussion of wealthy Los Angeles neighborhoods is brought up, an image of wealthy white individuals commuting from their single-family homes in an expensive car is often conjured. And when terms like ‘the slums” or “inner-city neighborhoods” are discussed, this picture turns into one of people of color struggling in decaying high-rises. It seems so odd that many have these clashing associations between wealth, race, and housing density. Why exactly do we have these beliefs, what exactly led us to this place, and how are the existing systems of power maintaining this division?

This all begins with the practice known as redlining. According to the Cambridge Dictionary, redlining is defined as the practice of refusing to lend money, give mortgages, or sell home insurance to people living in poor areas, or of charging them high rates 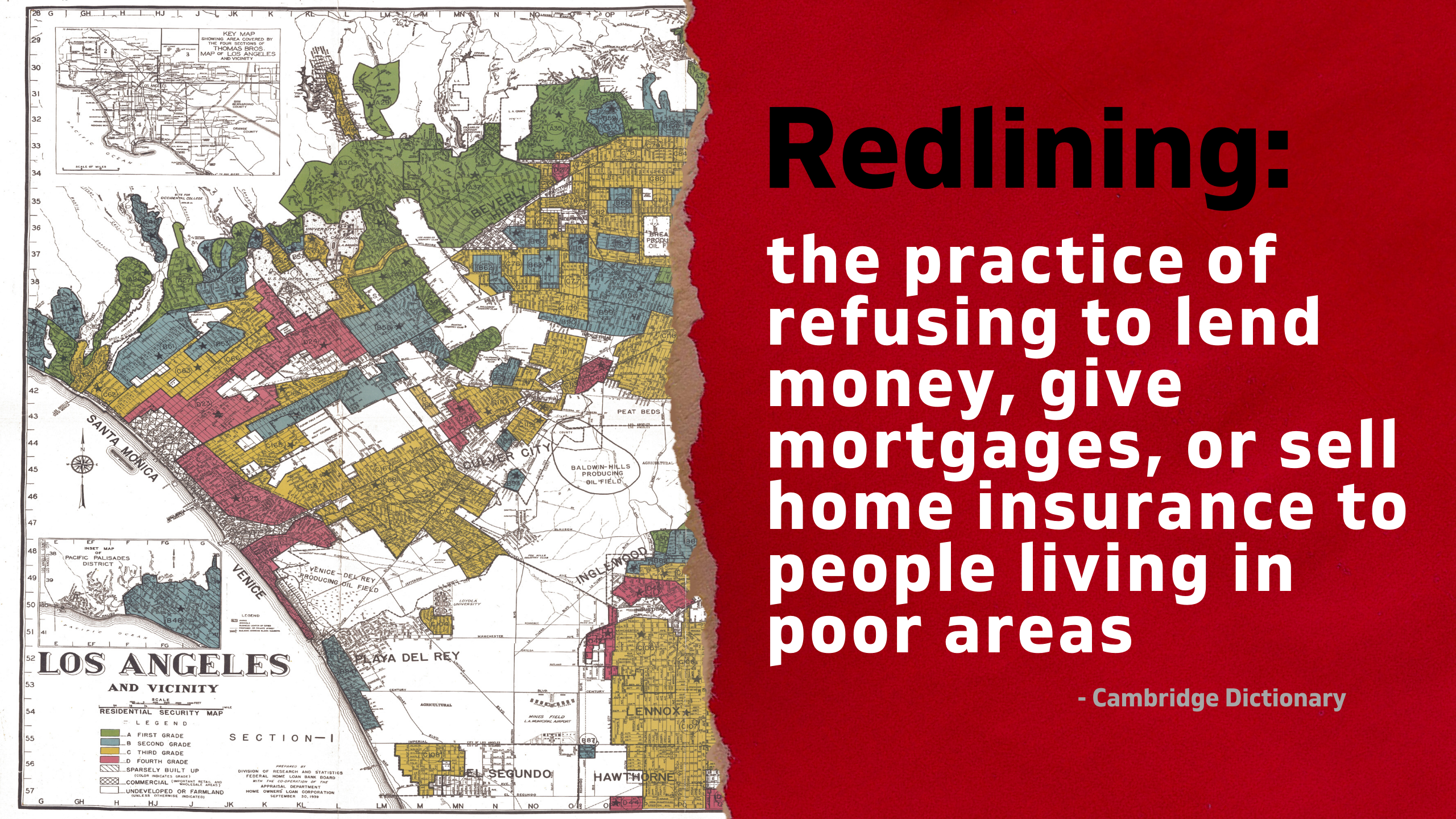 for this. This practice formally began in the United States in the 1930s. During the New Deal, the U.S Federal Government established the Federal Housing Administration with the passage of the National Housing Act of 1934. This agency was tasked with issuing mortgage loans to American citizens to stimulate homeownership and the economy. However, just like in the U.S’s entire history, Black Americans were discriminated against during this procedure. When a sister organization of the F.H.H, the Home Owners’ Loan Corporation, contracted with banks on where to give out loans in cities, they created maps that color-coded the level of financial “risk” that each neighborhood had. If a neighborhood had a sizable percentage of Black Residents, then it would be put into the “red” category, a level of risk so high that no banks were allowed to give out loans there. Since purchasing a home became the primary driver of wealth generation following the end of the Second World War, Black Americans were denied the opportunity to join the middle class and were restricted to decaying, overcrowded neighborhoods devoid of opportunities.

As living in a monoethnic suburban community with white picket fences was considered the ideal life in the mid-century, areas considered safe for investment were overwhelmingly white, new, and reserved for single-family housing. According to the Color of Law by Richard Rothstein, single-family neighborhoods were known to be prohibitively expensive for members of economically disadvantaged communities (which were disproportionately made up of people of color)  and were created to maintain de-facto segregation. This was only compounded by the fact that Black veterans were denied mortgage assistance from the federal government, making it near-impossible to move into one of these areas. As apartments and public housing high rises increasingly became ill-maintained carcasses in black neighborhoods, the inverse correlation between housing density and quality became imprinted into the collective American imagination.

The effects of single-family housing upon segregation can still be seen today. A case study from St. Louis shows that neighborhoods designated as the “best” quality were 75% single-family and had higher economic mobility than neighborhoods designated as the “worst”, which are only 3% single-family housing. In Los Angeles county, this effect can be seen in the divergence of population density and wealth. The top ten most dense neighborhoods and towns in Los Angeles are disproportionately composed of immigrants, communities of color, and lower-income individuals, while high-opportunity areas such as Beverly Hills, Santa Monica, and Bel-Air are far less dense.

Numerous desegregation measures are taking in abolishing single-family zoning as a means to their ends. In Minneapolis, Minnesota, the (as of writing) epicenter of the George Floyd Rebellion, officially abolished single-family zoning as part of its ambitious Minneapolis 2040 plan. Planners for Charlotte North Carolina are studying implementing this measure to aid with their own equity goals.

But whether single-family housing is maintained or abolished, how should we move forward to densify former single-family zoning districts? Well, the primary focus should be on making “gentle” increases in density, or small increments in housing stick diversity instead of immediately building tall towers. One common example is multiplex housing. Multiplex houses are medium-sized structures that consist of multiple residential units attached to each other. Common forms of multiplex housing include duplexes (where two units are adjoined to each other) Triplexes (three units) and quadplexes (four). Since multiplexes often take up a similar amount of square footage to a detached home, they can be built in such single-family zoned areas quite easily. Other forms of gentle density housing include townhouses (rows of homes that are directly attached to each other) Accessory-Dwelling Units (miniature attachments to homes that provide a single unit of housing) and small-scale apartments.

The best ways for these types of housing to infiltrate into current single-family zones neighborhoods is through policy and zoning legislation. Minneapolis’s example of allowing for multiplexes in (formerly) single-family areas is definitely a prime example, but others can be found right here in California. In 2018, the county of Los Angeles approved an accessory development unit ordinance, permitting the construction of such housing. If passed, California Assembly Bill  AB-1851 by Buffy Wicks would allow religious institutions such as Synagogues, Mosques, and Churches to build housing on their parking lots. And although failed, SB 50’s focus on upzoning areas in wealthy job centers and areas near transit to allow for multifamily housing can be implemented in future policy.

Single-family housing is a concept that has its roots in maintaining strict race and class-based segregation. Subdividing land such that only a small number of housing capacity can be built is guaranteed to raise the cost of living and encourage community isolation. By working to abolish single-family housing and build gentler density, we can start to reverse the damage done by mid-century redlining. More and more American municipalities are waking up to this, and with the right amount of effort a new sustainable paradigm will emerge.

Check out our latest video: In LA, segregation lives on

What Is Missing Middle Housing and the Purple Line Neighborhood Plan?

by Isaac Gendler | Jul 27, 2020
There seems to be a strong disconnect when it comes to ranges in housing discourse. If you talk to many people, you would probably think that neighborhoods are either rows of suburban-style single-family housing or a “manhattan-like” cluster of skyscrapers. However, there exists a nice happy medium in between these two extremes called Missing Middle […]