The housing crisis is a women’s issue 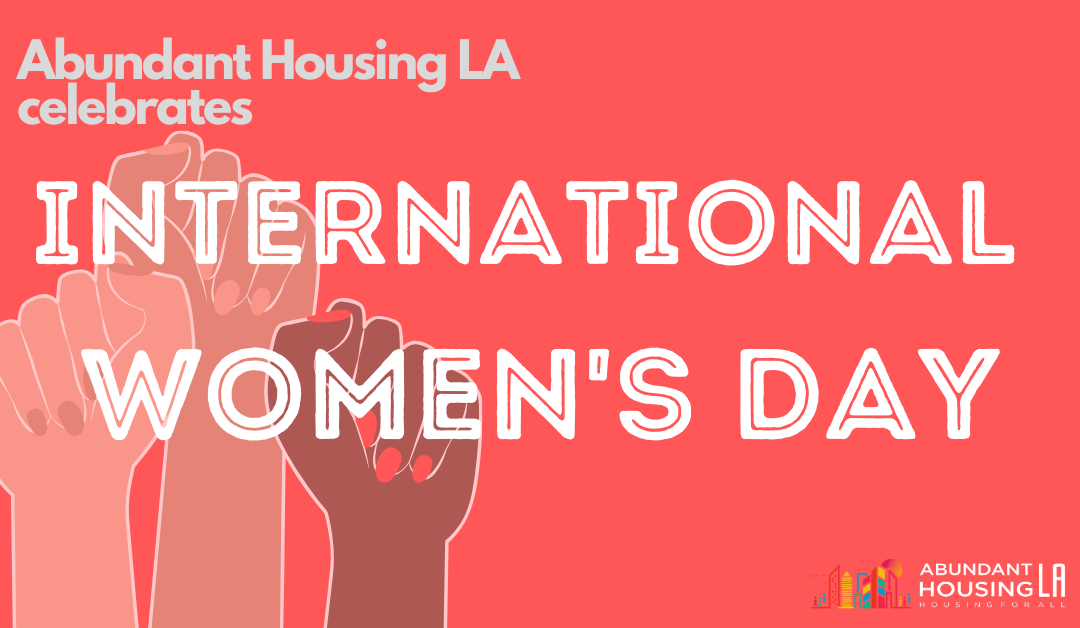 On Sunday, Abundant Housing LA joined the rest of the world in celebrating International Women’s Day! Though the day and this entire month are a chance to celebrate the advances made by and for women, it’s also a day that invites us to reflect on the ways in which women still face discrimination and other obstacles to equality. Within the context of housing alone, women still face real-world challenges that can make confronting the effects of the crushing housing crisis right here in Los Angeles especially daunting. 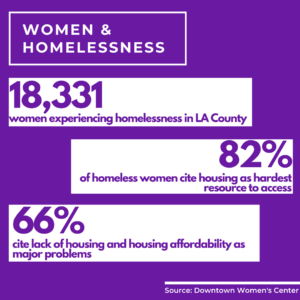 One of the most glaring consequences of the housing shortage is our city’s homelessness crisis. With housing costs soaring, many find themselves pushed out of their homes and forced to live in their cars or on the streets. It’s in this already difficult environment that the added challenges for women manifest themselves. The Downtown Women’s Center (DWC) is the only organization in LA dedicated exclusively to “serving and empowering women experiencing homelessness and formerly homeless women”. In their 2019 Los Angeles City Women’s Needs Assessment, the DWC published data that shed light on how precisely homelessness looks different for women, and the facts are heartbreaking.

In 2019 there were about 18,331 women experiencing homelessness in Los Angeles County. That’s a 41% increase in homelessness for women from 2013. Of those women, 62% were living in Los Angeles prior to becoming homeless, with an additional 11% coming from elsewhere in Southern California. Only 19% of homeless women came from outside of the state. That means that a large majority of homeless women did not move here after losing their homes, but that they too had tried to navigate housing in LA before ultimately losing it altogether. 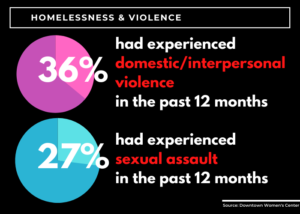 Once on the streets, women face especially dangerous conditions. In their assessment, the DWC found that more than 36% of women experiencing homelessness had experienced this domestic or interpersonal violence within the past year. More than a quarter, 27% had experienced sexual assault in the same period. The current state of housing in LA is literally pushing tens of thousands of women into the streets where they face serious threats to their physical, mental, and emotional well-being. That is unacceptable.

But a woman doesn’t have to be homeless to be subject to the continuing inequalities facing us in the realm of housing. According to data released by the County in 2017, a woman earns 81 cents for every dollar a man does. Nationally, that figure is about 72 cents, meaning Los Angeles is ahead when it comes to pay equality, but far from perfect. In a county where the median home value is more than double the national – $595,400 compared to $239,800 – even our smaller pay gap fails to make up for the exorbitant cost of housing. And that translates to serious hardship for far too many women and families. According to the City of Los Angeles Women’s Housing Gap Analysis, about 7 of every 10 low-income women classify as being “severely” rent-burdened.

The reality of the housing crisis as it looks for women underscores a broad reality: there simply isn’t enough housing. 66% of the respondents to the DWC’s assessment listed the lack of housing and housing affordability as a major problem. The DWC lists these among “the largest barriers” for homeless women. As Abundant Housing LA continues its march toward a more livable and sustainable LA where everyone has access to good and affordable housing, we honor the women who have and continue to march for justice and equality for themselves and their families. The housing crisis is a women’s issue; women have to be part of the conversation and part of the solution.