What is CEQA and why it needs to be reformed? Part I 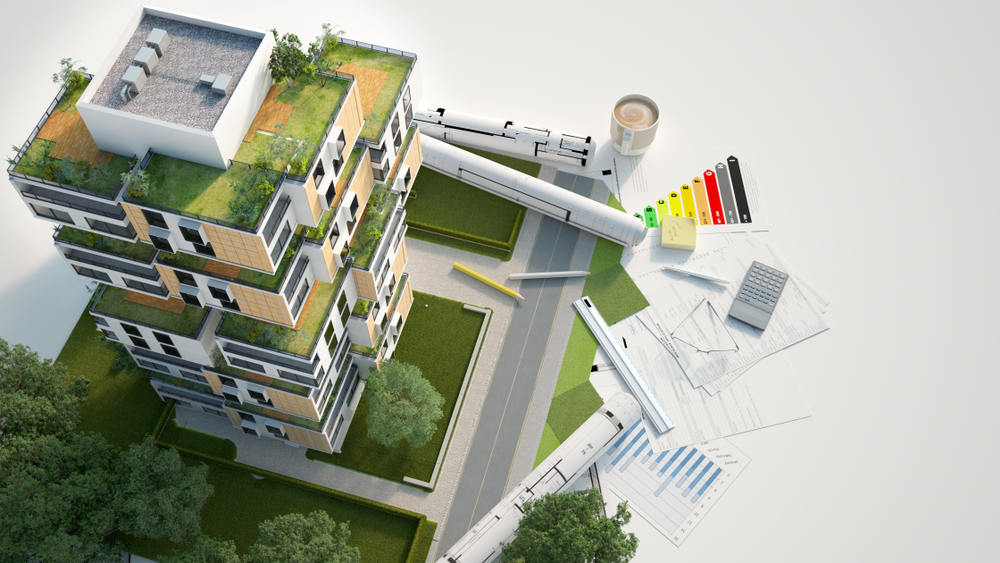 UC Berkeley is a prestigious, world-class university, and it is also many hardworking students’ dream school. But since 2019, the higher education institution had been involved in a lawsuit that threatened to cap enrollment numbers – which would have forced the university to turn away as many as 3000 qualified and admitted students. The basis of the lawsuit? The California Environmental Quality Act.

The California Environmental Quality Act, commonly known as CEQA, is a 50-year-old law that’s meant to maintain the quality of the environment. It was created when water and air quality was worsening in the golden state, and was hailed as a huge win for environmental protection. How did a public university get sued based on environmental law? As we seek to end a chronic and severe housing shortage, it’s time to confront CEQA’s mixed legacy in shaping our cities. This is Part I of a two-part blog series on CEQA.

An overview of CEQA

The stated purpose of CEQA is to “inform government decision-makers and the public about the potential environmental effects of proposed activities and to prevent significant, avoidable environmental damage.” And superficially, the law achieves exactly that: It requires the government to meticulously document, evaluate, and publicize the impacts of discretionary projects before moving them forward, and provides numerous opportunities for public input on the projects. As such, CEQA is both substantive and procedural, meaning that the law dictates what needs to be documented for public review, and what the public review process looks like.

A project is “discretionary” when it requires decision makers’ approval at their discretion. This is in contrast to “ministerial” projects, which require governmental decisions that involve little to no personal judgment by public officials. In other words, ministerial decisions are made solely based on objective, fixed standards and measurements. For example, the issuance of a driver’s license is a ministerial decision. 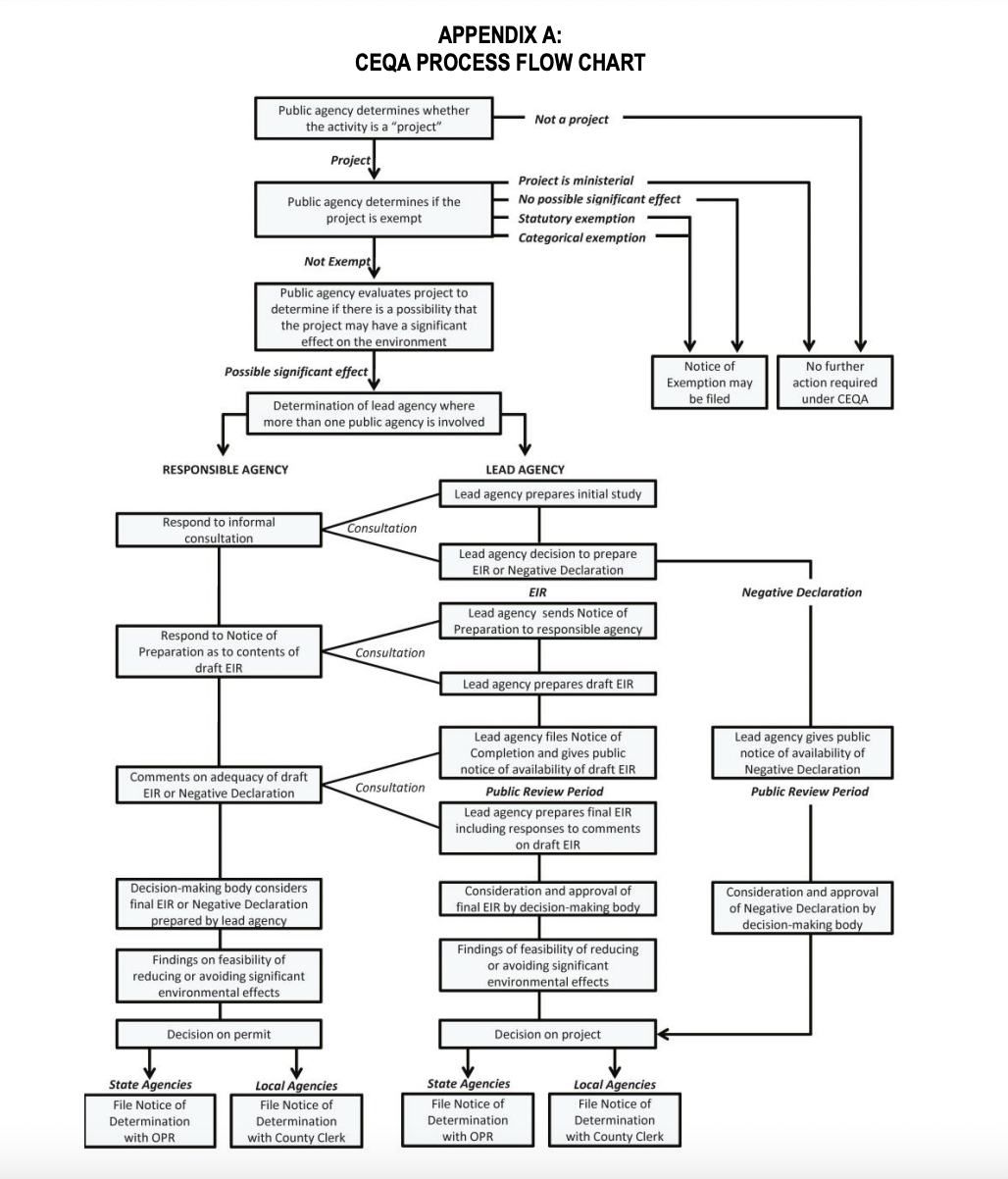 The burden of preparing required documents for CEQA falls onto the project applicant, who often outsources the work to private consultants. Environmental consultants will first conduct an initial documentation of the project’s environmental impact, which is called an initial study. This study compiles basic project information such as its location, the existing surrounding environment, a description of the project to be implemented, and identifications of potential environmental effects of the project. If any of the identified effects are considered potentially significant, a discussion of possible alternatives or mitigation must be included.

Below is a list of environmental factors to consider when conducting an initial study. The statute itself is vague about what exactly is a significant impact; local governments and agencies are supposed to create their own guidelines and thresholds for measuring impact. Also, note that there are a few scenarios where it is mandatory for find the project to have significant environmental impact (Mandatory Findings of Significance), and these conditions are broad:

A checklist for the Initial Study. Source: 2022 CEQA Statutes and Guidelines

The EIR process is guaranteed to be lengthy, involving first composing and publishing a draft EIR for extensive public review through numerous meetings and hearings, followed by the preparation of a final EIR, which addresses public input received during the draft review period, for another round of extensive and thorough public review. While the lead agency triggers the EIR process, the project applicant again bears the burden of preparing the EIR and conducting the public outreach process. This typically is outsourced to consultants as well.

When the EIR process is complete, the lead agency will consider the certification of the Final EIR. At this point, the lead agency will make the decision to either approve or reject the project, either with changes to the project that will lessen its impact, or with a “Statement of Overriding Considerations”, which basically means that the approving agency believes the project’s benefits outweigh its environmental impact, and that no feasible alternatives are available to mitigate the environmental impact.

CEQA is meant to be enforced through extensive public oversight as well as litigation. With 21 environmental factors to evaluate, ranging from “Aesthetics” to “Recreation”, there are many, many opportunities for public scrutiny over the EIR’s content. Additionally, procedural mistakes during the public review process can also invalidate the project’s EIR in a lawsuit. In the next section, we will talk about the unintended but significant consequences of CEQA.

Finally, there are different types of EIR documents, such as:

Master EIRs: According to the 2022 CEQA Statutes and Guidelines, a Master EIR shall “evaluate the cumulative impacts, growth-inducing impacts, and irreversible significant effects on the environment of subsequent projects.” In other words, a Master EIR analyzes a larger project that consists of many smaller projects, and provides the basis of later decision making concerning those smaller projects. For a few types of projects, a Master EIR is preferable as it frontloads environmental review, which will help streamline later approvals. Such projects include:

A Program EIR analyzes a group of connected projects or series of actions that together, form one large project.

A Project EIR is the most basic of all EIRs. It deals solely with a specific and discrete project that does not involve multiple phases or a series of actions.

Support our work. Sign up to stay updated on housing today!

“CEQA was adopted at the tail end of the interstate highway building and urban renewal era, and also right after the 1969 Santa Barbara oil spill, and was designed with those kinds of concerns in mind. It was developed before there was widespread understanding of climate change, although it has since been revised to require analysis of GHG emissions. However, it’s structured to assume the status quo should be maintained and changes are what require scrutiny.” – David Barboza, AICP, Directory of Policy and Research, Abundant Housing LA

At times, CEQA worked to protect the natural environment. For example, in 2021 nonprofit group Sierra Watch successfully sued and stopped the construction of a 94-acre resort on wildland near Lake Tahoe. But keep in mind the legislative intent of CEQA is to *maintain* the environment, not necessarily *better*, and that includes the urban environment as well.

While CEQA is notorious for being abused by anti-housing and anti-growth forces, actual CEQA lawsuits are infrequent. A survey of all CEQA lawsuits between 2012 and 2015 found that fewer than 1 out of 100 projects that went through CEQA were sued. However, this doesn’t mean CEQA is not being leveraged against urban housing growth. The fact is, because CEQA is so lengthy and burdensome, most developers simply do whatever it takes to avoid having to go through the process altogether. Most of the time, this means scaling down the project – reducing the number of housing units produced.

When CEQA cases do go to litigation, the controversial nature of this statute can be seen in court. Of the 19 key CEQA decisions from 2021 as summarized in the 2022 CEQA Statutes and Guidelines, a couple stood out:

To bring a CEQA lawsuit, one must pass the “fair argument” test: Can a reasonable person come to a different conclusion than what’s documented in the EIR? This is a low bar, given the vast information required of an EIR, which provides ample opportunities for alternative interpretation. Additionally, keep in mind that CEQA works to maintain and protect the baseline environment, i.e., the environment before implementing the project, not better. Therefore, we have a lawsuit against a conservation authority on the basis of reduced parking, even though reduced parking is in fact beneficial to the natural environment.

And we see far-reaching consequences stemming from the UC Berkeley decision, consequences that simply are not justifiable. Because of this lawsuit, Berkeley almost had to turn away about 3000 students that have already been admitted by the school. These students would have been denied a chance at attending Berkeley, one of the best education and research institutions in the world, which will most certainly have lifelong impacts on their upward mobility, and ultimately the economic vitality of California. All these consequences are due to vested residents’ anti-growth interest – this is unconscionable.

In response to the Berkeley lawsuit, legislators proposed SB 886 to statutorily exempt student housing from CEQA. Just this Monday, they also unanimously passed SB 118, which gives UC Berkeley and other public universities 18 months to complete any court-ordered environmental review without having to reduce or freeze enrollment, and removes student enrollment as a project applicable to CEQA. This is a positive step toward CEQA reform.

As alluded to earlier, CEQA is not effective in addressing some environmental concerns as well as climate change, largely because the law categorically exempts projects that are ministerial but do have significant environmental impacts. For example, a detached single dwelling house in R1 zone is approved ministerially, thereby bypassing CEQA altogether, while a larger apartment project in the same area has to go through CEQA. But this doesn’t make sense: a detached house on a large lot serving one family means that each member of the family uses much more environmental and public resources (land, water, electricity, etc) than each apartment dweller. While cities do have to go through CEQA when updating general plans or specific plans, where patterns of development will be analyzed, these updates take place infrequently. In the meantime, CEQA is letting environmentally unsustainable projects proceed while bogging down projects that actually benefit the environment.

It’s important to note that CEQA is in most cases the only tool to guarantee community consultation and input on large projects. The concerns of low-income communities of color have been marginalized throughout the history of urban planning. Official government policies from the Federal to local levels, such as redlining and urban renewal, have resulted in unmistakable inequity in community health. Today, residents in formerly redlined areas are exposed to greater levels of air pollution, enjoy less tree canopy, and risk losing their homes to freeway expansion. CEQA has been a way to combat the practice of pushing local communities aside for larger corporate or governmental interests. But CEQA doesn’t ensure true representation, and as research from Katherine Einstein shows, it frequently perpetuates privilege – weaponized by white homeowners for exclusionary purposes. Reforming CEQA to ensure inclusive and equitable participation will help strengthen the law’s intent to ensure transparency while preventing it from being weaponized to exclude.

We clearly need to deeply reform CEQA. In the next installment of this series, we will go over past reforms to CEQA and where we can go from here. Stay tuned!

Support our work. Sign up to stay updated on housing today!