Yes, we can predict homelessness in California 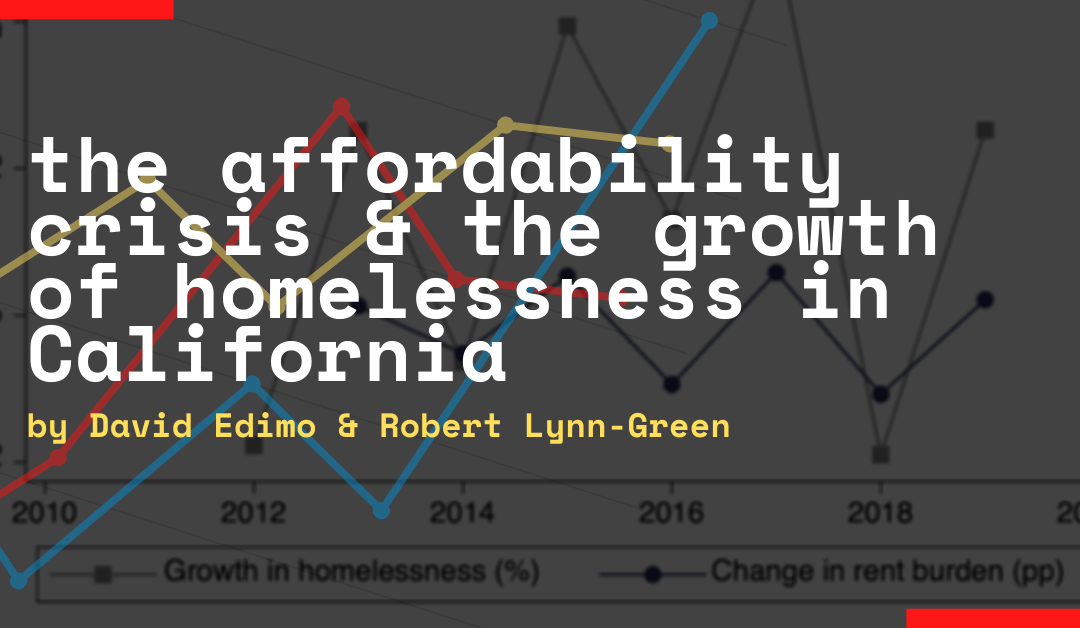 New analysis by Abundant Housing LA reveals the strong power of housing market conditions to predict homelessness in Los Angeles County and other California metropolitan areas. According to the analysis, each additional percent of income spent on rent by severely impoverished Los Angeles households predicts an additional three percent growth in the number of people experiencing homelessness. 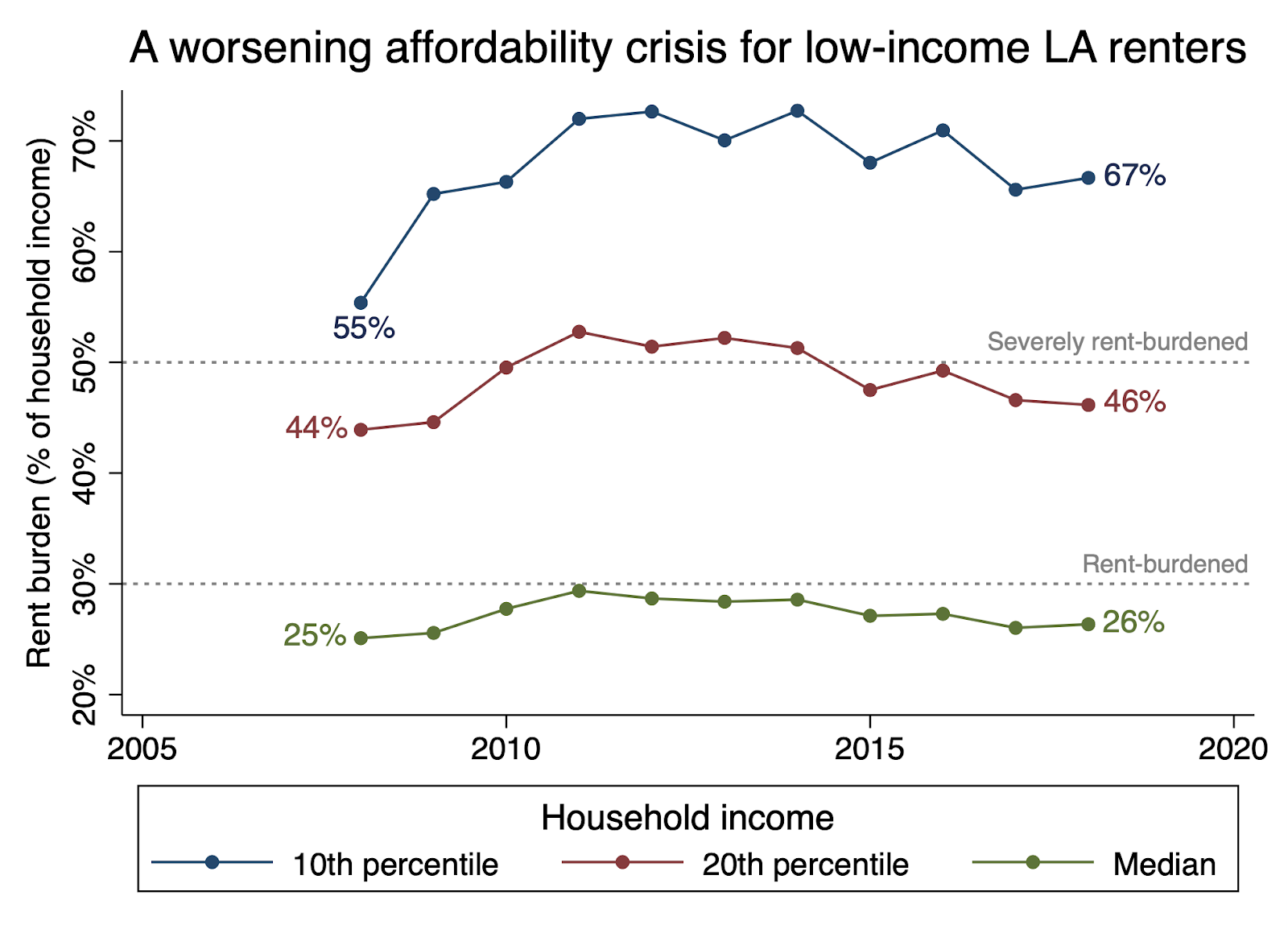 The AHLA analysis was spurred by the disappointing recent news that the number of residents of Los Angeles County experiencing homelessness rose to more than 66,000 people, a 13% increase from last year. This latest increase, reported by the LA Homeless Services Authority, draws attention to the worsening crisis of housing insecurity in Los Angeles County. While homelessness is not solely attributable to housing market conditions—it is the result of a confluence of economic, social, and health factors—the ability to comfortably afford rent can make all the difference for households experiencing risk factors commonly linked to homelessness, such as job insecurity and addiction. Governments and social services providers must redouble their efforts to keep Angelenos housed and to rapidly rehouse those who do fall into homelessness. 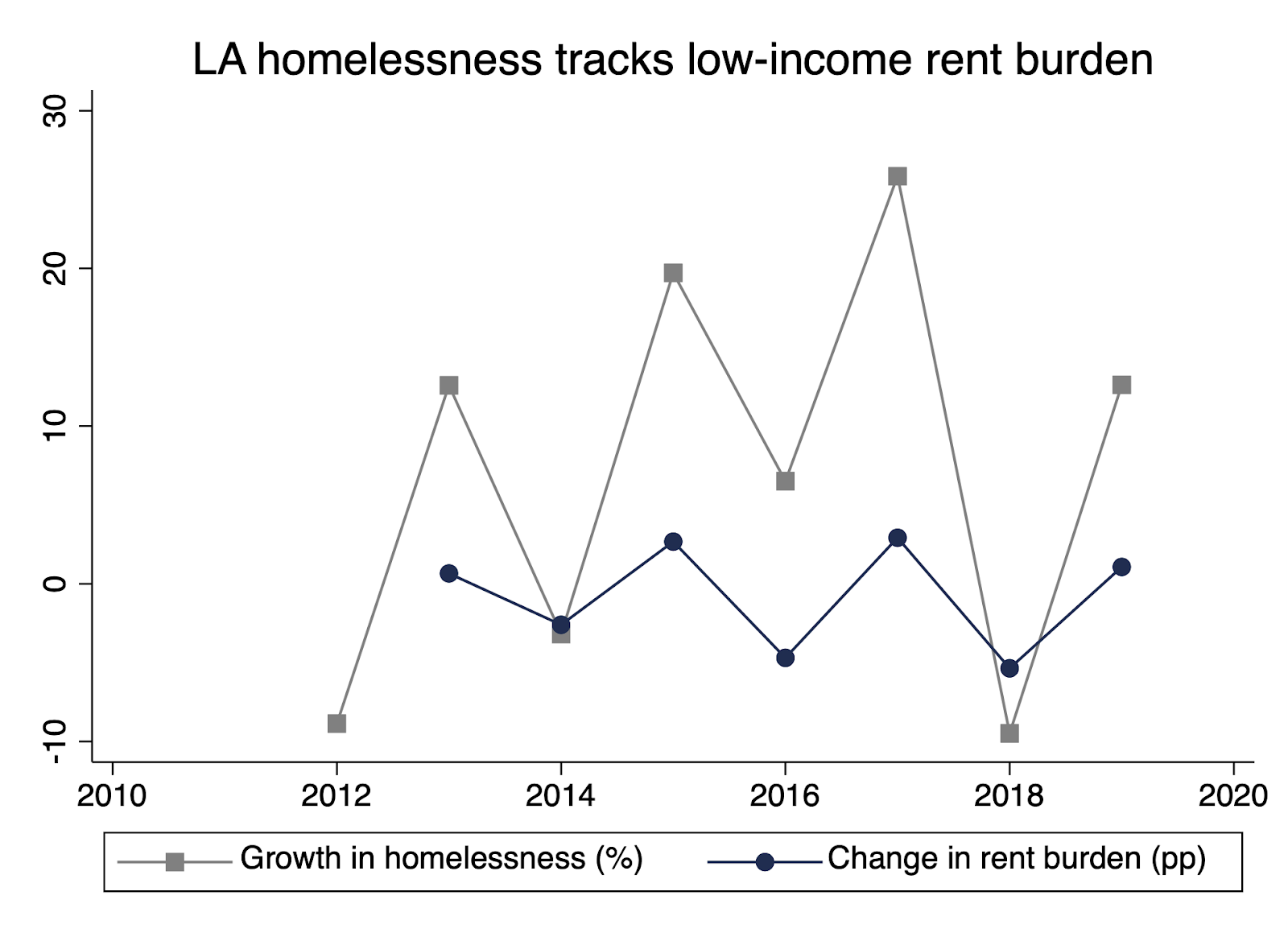 There are a number of proposals to make housing more affordable for low-income families. One such recent proposal from former Vice President Joe Biden’s presidential campaign would ensure that every eligible household receives a Housing Choice Voucher (also known as Section 8). These vouchers fill the gap between 30% of a low-income household’s income and the market rent rate in that household’s’s area. According to the Biden campaign and the Center on Budget and Policy Priorities, while more than 2 million households currently receive vouchers, more than three-quarters of eligible renter households don’t receive any rental assistance because federal programs are persistently underfunded.

AHLA’s analysis predicts that if the cost of rent for the lowest-income households in Los Angeles  (i.e. those at the 10th percentile of income) were to decrease to 30% of household income over the course of five years—assuming that the housing market absorbed low-income households without frictions—the number of homeless residents of Los Angeles County would fall by more than 20,000 people, a 30% decrease.

To stem the instability that causes homelessness in the first place, housing must be made affordable through a well-funded rent voucher program. But also, the Los Angeles region must address its longstanding housing shortage by expanding the supply of new housing, both market-rate and deed-restricted affordable. AHLA’s FAIR LA Plan would ensure that hundreds of thousands of homes built over the next decade in Los Angeles are built in high-opportunity neighborhoods with access to jobs and transit. This would lower rents, reduce driving and carbon emissions, increase economic opportunity, and reverse patterns of racial and income segregation.

AHLA’s work joins together nearly a decade of data from the Census Bureau and the Department of Housing and Urban Development. Homelessness data for Los Angeles comes from the Los Angeles County Continuum of Care, the coordinating body for homelessness services in Greater Los Angeles, excluding Glendale, Pasadena, and Long Beach. The combined dataset used for the analysis is available in the AHLA Github. This analysis builds on a study by researchers Chris Glynn, Thomas Byrne, and Dennis Culhane, which found that homelessness rates skyrocket in areas where the typical family spends more than 32% of its income on rent.

In addition to Los Angeles County, AHLA also examined predictive relationships in six other metropolitan areas: San Francisco, San Diego, Honolulu, New York, Miami-Dade County, and Washington, D.C. While the rent burdens on households at the 10th and 20th percentile of income were most predictive of homelessness in California cities, rent burdens could not meaningfully predict changes in homelessness outside of California.

It should be noted that the regressions in this analysis are parsimonious, only considering a small set of variables. Future supplemental research should consider analyzing a more thorough set of equations that would control for a wider variety of phenomena that occurred across these places over time.

We believe that the variation observed in the relationship between rent burdens and homelessness across cities is partially due to local differences in housing and homelessness policy. For example, while cities in California tend to focus efforts on developing affordable housing, New York focuses much of their efforts on providing homeless shelters. Of the 56,000 homeless people in Los Angeles in 2019, 42,000 were unsheltered, while only 3,600 out of 78,000 homeless people in New York are unsheltered.

Miami-Dade County experienced a decrease in homelessness between 2016 and 2019, largely due to a focus on constructing permanent supportive housing, although the county still needs 130,000 housing units to cover its gap. A study by researchers David Lee and Michael McGuire found that county governments that align their homelessness programs with federal and state government policies have better results in homelessness reduction and affordable housing production than those that do not. It is, however, unlikely that the same policy plan will work for every city, because homelessness is caused by a diverse array of factors, including access to affordable housing, overall poverty, and proximity to public transit, depending on the city or geographic region.

AHLA has compiled a list of informative studies and reports below that expand on the evolving state of research on the relationship between the housing market and homelessness. To get involved in the fight for abundant housing in Los Angeles, learn how you can take action now.

A technical addendum with additional detail on AHLA’s regression analysis is available here.

HUD recognizes as homeless those (1) living in a place not meant for habitation, including emergency shelters and transitional housing, (2) people who are expecting to lose their residence within fourteen days, (3) families with children that are unstably housed, (4) people fleeing domestic violence. 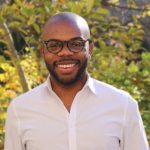 David is a Policy and Research summer intern at Abundant Housing LA. He studies economics at Yale University, and has done research on urban housing markets.